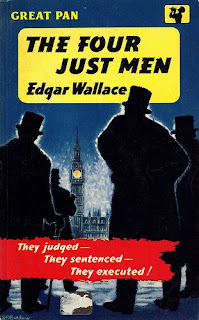 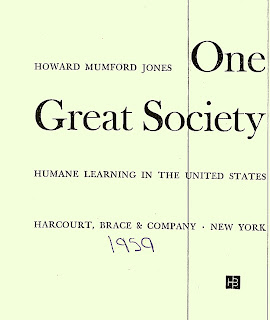 Don't you love how planful & totalizingly synthetic--willing to generalize--intellectuals were circa 1960? This quality becomes more and more remarkable to me the further into the details of the books and projects of the time I get.

Howard Mumford Jones took over the American Council of Learned Societies in 1955 (ACLS was in turmoil then) and by 1960 he published a book to make the case generally. Imagine an intellectual today talking about one society? Humanities saves all.
Posted by Al Filreis at 11:54 AM

Nicholas Joost and the 1920s rage 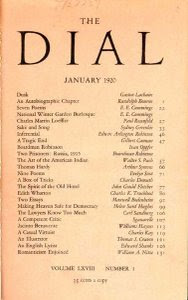 Nicholas Joost had been a Chicago-area professor and, for several years in the early 50s, was an associate editor at Poetry magazine. After a while his main interest became The Dial, the avant-garde magazine whose heyday had been the 1920s. Eventually he would write several books about the Dial but first, from 1956 through 1960, he helped prepare a major exhibit on the Dial put on at the Worcester Museum (in Massachusetts). Joost's manuscripts (at Georgetown) include correspondence of the late fifties and they seem (to judge from the finding aid) almost entirely taken up with the Dial exhibit. I haven't seen the exhibit catalogue for the show, which opened in '59 and ran through part of '60, but I'm soon going to be in touch with the folks now at Worcester, get a copy of the catalogue and find out what institutional records they have kept. I've long been curious about specific reasons why the 1920s were so much the rage in the mid and late 1950s, why specifically Fitzgerald's fiction had such a comeback, why American modernists circa 1925 was of such great interest. This Dial show and its reception will, I think, give me some further clues.
Posted by Al Filreis at 9:17 AM