"Writing is in fact cut-ups of games and economic behavior overheard." That's Burroughs in 1960.

The poems of Minutes to Go more responsively and interestingly render the “rounendless talk” of the world and ambient incessant language-making and -uttering than did the earlier, more coherently and singularly subjective Beat narratives such as On the Road or Howl. Because it in effect overhears the American cultural response, the Burroughs/Gysin piece titled “Open Letter to Life Magazine” responds more effectively to the sensational, erroneous, dismissive and culturally conservative Life article about the “Beat Generation” published on December 5, 1959, than would the conventional Beat rejoinder to the predictable and perhaps inevitable hegemonic absorption of the challenge represented by this ecstatic, frankly obscene, linguistically awry, anti-quietist opposition. In works like “Open Letter to Life Magazine,” that oppositional mode is very much at hand, undiminished, but with a crucial difference: the words and phrases themselves originate from the source, turned (literally) now into the Kerouacian, Ginsbergian ecstatic manner that tends to prove at least to sympathetic readers that the language of alterity is already in the American ambience. Here is the opening passage of the piece, constructed entirely of text strips from Life’s condescensing hatchet-job: 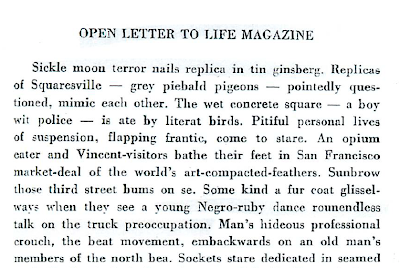 Now, not tourists visiting North Beach but the poets themselves do the staring. Whose life is suspended? Not much of an accident is required to shift the gaze back on the gazers, those curious about the Other who opts out of Americans’ hideous professional crouch. Risen from that, embackwards, they merge with street bums, opium eaters and “Negro-ruby dance rounendless talk on the truck preoccupation.” Was the latter originally a reference to pushing jalopies cross-country, to the inevitable seeking out of African-American urban neighborhood? The line—-“Negro-ruby dance rounendless talk on the truck preoccupation”-—with its internal rhymes and syncopations, seems right out of Howl, composed by the best minds of the generation, and yet it’s the work of Life’s writers. “Sample a drug,” says Life, if you only look at the language a certain way, “called heavy commitments.”

I've made available a PDF of the whole piece.

More here on Minutes to Go and Gysin's "discovery" of the cut-up method.
Posted by Al Filreis at 12:36 PM