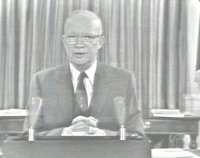 The archives show many versions of Eisenhower's farewell address warning of the military-industrial complex. The speech was delivered in January 1961, just before JFK took office. But versions of the idea and even of the speech itself date through 1960.

The phrase that would emerge as the most enduring legacy of what became, arguably, the most famous farewell address since George Washington’s evolved over 20 months and was agreed to only a few days before it was delivered.

Documents released Friday by the National Archives shed new light on the genesis of the phrase in the televised address, which Eisenhower delivered on Jan. 17, 1961, three days before his successor’s inauguration.

In the final version, the president recalled that until recently the nation had no permanent arms industry, that “American makers of plowshares could, with time and as required, make swords as well,” but said that the country could no longer risk “emergency improvisation of national defense.” An adequate military establishment and arms industry were vital, he said, but their conjunction and “its total influence — economic, political, even spiritual” also had “grave implications.”

“In the councils of government, we must guard against the acquisition of unwarranted influence, whether sought or unsought, by the military-industrial complex,” Eisenhower warned. “The potential for the disastrous rise of misplaced power exists and will persist. We must never let the weight of this combination endanger our liberties or democratic processes.”

In the version he read from that night, those words were underlined. Several were typed in capital letters.

The newly released letters, memos and speech drafts — 21 in all — were received by the National Archives from Grant Moos, whose father, Malcolm, was Eisenhower’s special assistant and chief speechwriter.

“It’s probably the most important farewell address of the modern era,” said Karl Weissenbach, director of the Eisenhower Presidential Library and Museum in Abilene, Kan. “And now we get to see its evolution, which started in May 1959 and didn’t end until it was delivered. We also learn the important role of Milton Eisenhower, who was instrumental in making sure that his brother’s thoughts would be correctly portrayed.”

The earliest White House memos suggesting a farewell address mentioned only an appeal for bipartisanship. But the president wrote his brother on May 25, 1959, of “the importance of getting our people to understand that local affairs have a definite relationship to foreign affairs.” A year later, another White House aide was urging the president’s speechwriter to read Washington’s farewell address, especially its warning of “overgrown military establishments.”

An undated draft titled “commencement” called for “jealous precaution” (Milton Eisenhower later deleted “jealous”) by civilian authorities “to avoid measures which would enable any segment of this military-industrial complex to sharpen the focus of its own power at the expense of the sound balance which now prevails.”

The president’s staff later expressed surprise at the phrase’s durability.

“I am sure that had it been uttered by anyone except a president who had also been the Army’s five-star chief of staff, it would long since have been forgotten,” Williams recalled years later.