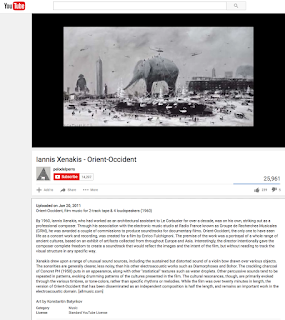 In 1960 Iannis Xenakis composed and recorded the soundtrack for a film commissioned by UNESCO (of the United Nations) by Enrico Fulchignoni. The film links disparate eras and cultures—a "contemplative homage to vanished cultures." Xenakis aimed to "translat[e] the perspective of men today when faced with the inheritance of their distant ancestors." The Fulchignoni film was presented in Paris at the Musee Cernuschi for the occasion of an exhibition about the recipocal influences of various civilizations, from Greece to Italy, all the way to Japan, passing through India and China along the way. Among the sound sources is a violin bow drawn over various objects. It has been described as "an electroacoustic piece for magnetic tape with four tracks."

A recording of the Xenakis score/soundtrack is available at YouTube here.
Posted by Al Filreis at 10:27 AM