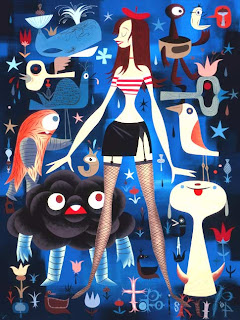 Pop surrealism, a So-Cal quasi-underground movement of the current decade, looks back to the late 50s and early 60s - obsessing visually over the cathode characters of that moment. Larry Reid, writing about this art, wonders why the interest in the 1960 moment today, and offers an idea of parallels. Both eras of prosperity in which conservatives extol nebulous family values while demonizing the influence of popular culture. Both eras stand at the end of the dominance of "inaccessible conceptual art and the opaque dialogue that accompanied it." I'm not sure I see these parallels, nor do I see the diminution of conceptual art now (or then). But since the reasons for interest in the 1960 moment now are obviously relevant to this project - this one here - I suppose I have to reckon seriously with such accounts of 2001's version of 1960.

I've written a longer entry on pop surrealism here. Above at right is Tim Biskup's "The Channeler."
Posted by Al Filreis at 7:45 AM