The February 15 issue of Life did a photo spread on modern and contemporary American poetry. To kick off National Library Week, Life commissioned Gordon Parks to celebration "the nationwide poetry boon." Parks chose some favorite poems and took photographs to go along with them, "conveying their themes with his camera." The subtitle of the spread: "Captured by the camera: haunting loveliness based on modern verse." The poets selected: John Peale Bishop, Millay, MacLeish, Frost, WCW ("The Red Wheelbarrow"), Jeffers, Richard Wilbur, Eliot, Crane. In the caption for Williams: "...writes extremely conversational verse." Eliot: "...the most influential of all contemporary poets...also one of the most complex." Crane: "...a highly neurotic genius." 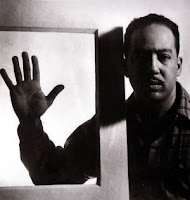 Parks was the first African American to work at Life. He co-founded Essence. His semi-autobiographical The Learning Tree would come out four years later, in '64, as would his film Flavio. He was an early contributor to the blaxploitation genre, and his son, Gordon Jr., directed Superfly. Again Life's intro to this "Kaleidoscope" notes that Parks chose the poems; already a main interest was race in America, yet none of the poems even hints at race or even really gestures toward the politics to which Parks would be so devoted. Perhaps this was all thematically truly before, for instance, he created a photo essay documenting the Selma to Montgomery march for Life (1963). At right, though, is a photo of Langston Hughes Park took in 1941; he apparently did not choose a Hughes poem for this spread.

In any case, Life is ecstatic about poetry's comeback: "Recordings of poems have rung up sales of more than two million albums. Poets are barnstorming the country, to recite their works before sellout audiences. In nightclubs and coffee houses, declaiming poetry is the rage, with out without musical accompaniment."
Posted by Al Filreis at 11:38 AM