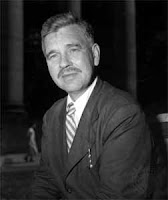 Late '59, and the super-famous literary journalist Malcolm Cowley (ex-expatriate, ex-radical, now household name among readers of the centrist-liberal literary weeklies such as The New Republic) was obviously working on Whitman. His three-page essay about Whitman published in the October 26, 1959 issue of TNR seems to be a chip off the workbench - something that came to him from another larger project. (That larger project was an introduction he wrote for a 1959 edition of Leaves of Grass.)

Even all those years ago, a slick literary weekly is not just going to publish an essay on Whitman's developing system of philosophy - I mean, an essay that is not a review and not hitched to some more relevant matter.

That is why, I think, Cowley adapted his piece about Whitman's philosophical ideas so that it's main point, seemingly, was that Whitman is a beatnik. Perhaps I found this interesting to read, then, only (1) in context of its original publication and (2) as a way of disclosing conventions of literary journalism.

It's a literary essay trying rather desperately and stupidly/superficially for a wider audience than one would get in 1960 by publishing in American Quarterly or American Literature. But now, for all time, we can say that people at the end of the 50s thought of Whitman as a forerunner of the beats on the basis of facts such as that both Walt and the beatnik walked with a "negligent slouch."

But it turns out that "Whitman's beatnik period...proved to be only a transitory phase of a life that had several other phases." So there's cake and eating it too. Whitman is a beat (EXTRA! EXTRA! READ ALL ABOUT IT!) but he's really not (we wouldn't want to be a slave to fashion).

So, follow me here: Whitman is a beatnik. Read on. But, well, no he's not. And in fact Whitman (and thus the beats) do all these extra-poetic antics to cover over the fact that the writing is bad. This is why someone like Kenneth Patchen sets his poetry to music - so that the music will drown out the poems' flaws; hence (still following?) since Whitman was like a beat, one can imagine Whitman needing a loud band to play while one hears his verse too, similarly hiding its failure as verse.

Cowley's piece was called "The Guru, the Beatnik and the Good Gray Poet." Here's a portion:

There were...literary men who described their meetings with Whitman in a tone of fascinated horror that suggests that accounts of present-day visitors to North Beach or Venice West. Indeed one cannot help feeling that the Whitman of those days was a predecessor of the beatniks. He had the beard, the untrimmed hair, the negligent slouch.... His costume...was another defiance of convention that might be regarded as the 1960 equivalent of sweatshirt and sandals.... He stayed out of the rat race, he avoided the squares, preferring the company of omnibus drivers and deckhands on the ferries; he was "real gone," he was "far out"; and he was writing poems in what Lawrence Lipton calls "the 'open,' free-swinging style that is prized in Beat Generation literature." "Whitman must have thought he was Kenneth Patchen," Lloyd Frankenberg said of those particular poems. Some of them should be read to loud music as a means of glossing over their faults and holding the listener's attention - not to the music of a jazz combo but perhaps to that of a regimental brass band.

Cowley also published on Whitman in the October 31, 1959 issue of the Saturday Review. This seems to be right out of the introduction he wrote for the above-mentioned new edition.
Posted by Al Filreis at 8:22 AM