Sometime light-verse guy - and pre-New Formalist - X. J. Kennedy was invited to be a Bread Loaf fellow for the first time in the summer of 1960. At that time John Ciardi ruled the roost there, and it was an era of retrenchment: Ciardi wanted to maintain the old Bread Loaf ways. Customs had been slipping; time for shoring up. Fellows and special guests (big-name writer visitors) were invited to the director's cottage for late-afternoon cocktails. No crashers, no riff-raff.

Kennedy remembers the first time Ciardi talked with him. "I held one of those fellowships that required a young writer to eat with and be nice to the paying customers." Ciardi warned Kennedy as follows: "Don't get too smart around here--I've read a lot better stuff than yours."

Meantime, in a letter to poet-humanist Read Bain, Ciardi complained: "$1000 a year to direct a headache is not an inducement.... [But] B.L. is the best goddman two-week house-party in the western hemisphere. If I had the money, I'd underwrite it myself."

Ciardi wrote a verse letter to Paul Cubeta on August 25, 1960, while at Bread Loaf. Cubeta was there--indeed he was Ciardi's assistant director.

Yes, those are all nice things to be, but
I am going to be an assistant director....

Robert Frost remained a Bread Loaf fixture, making an visit each summer between '58 and '62. He gave one evening lecture and it was the highlight--at least from the paying participants' standpoint--each time. In 1960 outsiders poured into the theater and filled up all the spaces; many of the paid-up Bread Loafers, and even a few staff, were unable to attend. (In '61 Ciardi figured that one out: he issued--and of course sold--tickets.)

Ciardi recruited "name" faculty to attract customers. The 1960 roster included Allen Drury, Edward Wallant, and Glorida Oden. (Ralph Ellison had been there in '59.) Some of young people there that summer would emerge much later--e.g. Samuel "Chip" Delaney who roomed across the hall from George Higgins, later a novelist (Higgins was just 20 years old then, a senior at Boston College who had won The Atlantic's college contest in fiction; his job at BL was to sling hash.)

Drury was a big deal in '60. His Advise and Consent was the number one best selling book of fiction that year.

Back to Kennedy and the Old Ways. Kennedy in '60 was told "that nobody was to come into the Treman Cottage except the staff and the fellows." Ciardi had hired Avis DeVoto (widow of the literary journalist/critic Bernard DeVoto) to be an etiquette supervisor. 1960 was her first summer and this helped to enforce custom. In '59 Alan Cheuse, who had been invited by Bill Sloane to attend the '59 conference as a waiter, led a disorganized lot of the Young in a movement against Ciardi's social orthodoxy. Cheuse was then "a vaguely Bohemian kid." During a sing-along at one of the BL parties, the partiers sang "Old Black Joe" while Ralph Ellison was standing there holding his drink. Cheuse went wild with anger at this. Leaped up and knocked over a huge trash bin full of beer cans and stopped the party. The gang of waiters and other young writers derided Ciardi's authority, smoked pot, held unauthorized meetings (my god!), and bolding invited themselves to the faculty-only/fellows-only parties. This culminated in '59, the summer of the "Old Black Joe" incident. And then, for '60, Ciardi found ways to restore social order and literary hierarchy. All was well at the Bread Loaf Writers Conference for a long while. 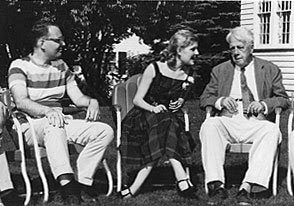 Above: X. J. Kennedy (left) and poet Claire McAllister with Robert Frost at the Bread Loaf Writers' Conference, August 1960
Posted by Al Filreis at 5:33 AM