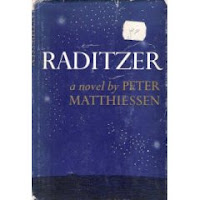 The reviews of Peter Matthiessen's short World War II novel Raditzer began appearing in late January '61. I can't find a publication date but I'm just going to say it's in late 1960. Matthiessen was 33 at the time. It was his third novel.

There's a Raditzer in every outfit circa 1944: the sniveling, weird little screw-up who can't pull his weight and adds to others' burden. Then there's Charlie Stark: sane, socialized, from a wealthy family. Stark wanted combat duty but was turned down, rejected a commission and ended up drafted onto this troop transport.

It turns out that Charlie Stark's war is as much (internally, emotionally) against the existence of the Raditzer type as against the Axis. It's a war between disgust and compassion. Compassion wins; Stark claims that Raditzer is his friend.

But Raditzer is an awful man, and eventually his lying and bragging get him thrown overboard - by real war-weary folks who have no Starkian ambivalence. Stark hurts from having connected himself (in large measure unconsciously) to badness.

Raditzer arranges for Stark to meet a cafe girl in Hawaii. In such scenes the priveleged naive at-sea Stark is pushed toward obsession and danger.

What's in it for us? Just another war novel written in '60? (Why so many? I've speculated on this previously.)

Well, Stark's Pacific tour of duty is prepared for completely - long before Raditzer enters his life. You see, Stark has been a student of art (ring the loud gongs of recognition here)...a student of art, you see, and he is compelled by the works of Paul Gauguin. He's obsessed with Polynesian symbols of love and hate, of life and death. In effect he's gone to fight World War II in the Allied navy for the wrong reasons - "wrong" in the geopolitical sense; wrong in the sense the conventional adjusted well-off American should comprehend and repress. Stark has gone to find - he's Conrad's Marlowe - the heart of his aesthetic and sexual darkness, lured there by art rather than by the nobility of the American adventure against fascism and imperialism. Stark is the aesthetic imperialist who needs Raditzer to bring him to the point of recognizing his (Stark's) own evil.

Ah, art. It'll bring out your inner Kurtz every time.
Posted by Al Filreis at 5:52 AM