"I would call Wallace a spiritmaker," Michael McClure has said, "a soul-maker, because I don't view Semina as a poetry magazine. I see Semina as an assemblage; the visual art in it is as interesting as the poetry. The act of creating it is an act that coincides with the poetry. I tend to look at the production of it. In other words: in the era of the slickest production values, here's probably the least slick magazine or the least slick assemblage that anybody had ever seen" (Support the Revolution 64).

Berman is shy about his own work but occasionally organized an exhibit to show it. One such show, at Ferus Gallery in LA in 1957, was busted by the cops. Berman himself was arrested "for exhibiting lewd material." (See below.) The piece the policed didn't like was not Berman's but Marjorie Cameron Parsons Kimmel (d. 1995) who went by "Cameron." The offending image had been published in Semina but copies of the magazine had been scattered on the gallery floor.

It seems that the next Berman show wasn't until 1965.

A 1964 broadside - 5.5" x 8.5" and printed in a small edition - was called Poetry Is a Muscular Principle. The text of this was written by Michael McClure, with a photo of McClure as a lion made by Wallace Berman, and Berman did the design and the printing.

Semina was eventually nine volumes. It was done in offset printing and also in letterpress printing.

Berman died in Topanga Canyon (north of LA) at the age of 50.

I'm looking at a fabulous exhibit catalogue prepared for Assemblage in California: Works from the late 50's and early 60's, a show at the U Cal Irvine art gallery in the fall of '68. (Berman was one of six artists featured in the show. Bruce Conner was one of the others.) 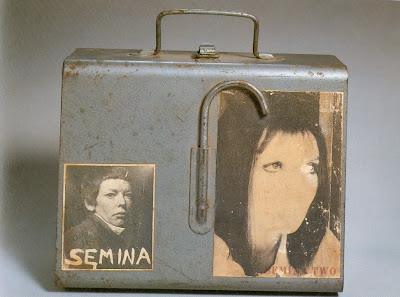 Christopher Knight in "Instant Artifacts" writes: "The inventory of pictures [Berman] overlaid over radio speakers is long: an antique bust, a palm-reader's chart, a jazz musician, a thumb, a bird, a one-eyed priest, a snake, a skull, a mandala, a praying cardinal, an engine, a flower, a soldier, a galaxy, a skeleton, a fighter plane, Edgar Bergen and Charlie McCarthy, a gun, a dancer, a Hebrew letter, handcuffed wrists, Buck Rogers, a bed, a window, keens, a coat, an ear, a bell tower, an American Indian chief, a Mayan relief, a butterfly with a pocket watch, Mike Jagger, a planet, a copulating couple." This is a Verifax collage. 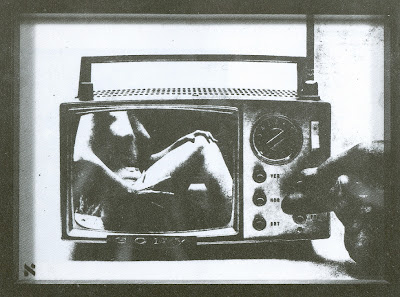 And a photograph of the Ferus Gallery door after the police raided the Berman exhibit and carried him off to jail: 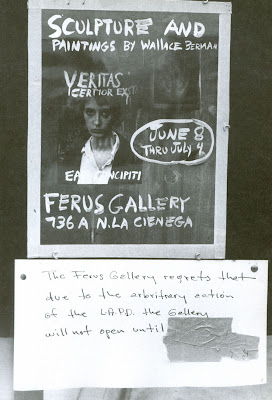 [] Exhibit catalogue, assemblage in california: works for the late 50's and early '60s, Art Gallery, Univ of California at Irvine, 1968.

In 1960 Berman started Semina Art Gallery on a houseboat in Larkspur, Marin County. He also that year published the sixth issue of Semina.
Posted by Al Filreis at 9:49 AM