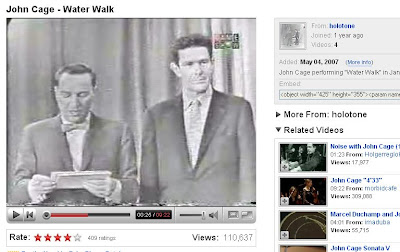 The exact date seems to be uncertain, but at some point in January 1960 John Cage actually appeared on the TV game show, I've Got a Secret. Thanks to Tom Devaney for pointing this out to me, and to WFMU for capturing the video (from re-runs?). Click here to view the video (on YouTube - where it's been viewed a remarkable 110,000 times as of this writing and has received a 4-out-of-5 star rating, and 346 comments from viewers).

Cage is permitted to perform "Water Work" in its entirety. While there are a number of condescending comments about Cage's music, on the whole the show treats him with respect. They even decided (spontaneously?) to give up the usual game format (four panelists try to guess what Cage does).

The composition was meant to include the sounds of five radios playing, but you won't hear them in this performance. It seems that two unions could not agree on which of them was supposed to plug the radios into the wall sockets, and of course it was forbidden, in a TV studio, for Cage or any other non-union person to plug them in. So no radios.
Posted by Al Filreis at 6:36 AM