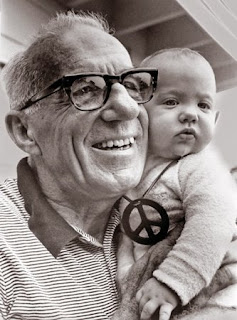 Dr. Benjamin Spock (he shall be "Ben" to us, as he was to his family and friends) was the first pediatrician to study psychoanalysis in order to understand children's needs and family dynamics. Somewhat daring there, it seems. But cautious and ratings-savvy in other ways. In February of '60, he was preparing the revise the directions in Baby and Child Care on artificial respiration for yet another edition, so readers could learn the new mouth-to-mouth method. His illustrator would need to do new drawings, and the good doctor was concerned to make sure, for the sake of young kids, that the victim wouldn't "look like an old corpse and make the procedure look like cannibalism or a perversion." So the baby that can't breathe looks so sweet and happy that one wonders what the emergency is.

Ben was later known as a anti-Vietnam dove, of course, and something of a consistent lefty. By in 1960 he was known exclusively as "the baby doctor," super-famous for his accessibly modern, oft-updated book on baby-rearing with its new child-centric approach.

Actually, to Ben, looking back later: "I was a hawk in 1960. I thought we had to be strong to stand up to the Soviet Union." He appeared in campaign ads for JFK and believed in the campaign rhetoric about the so-called "missile gap." The Kennedy people felt Spock was perfect for them: "We figured a lot of mothers would vote for Jack if they saw him with Spock," a Kennedy aide told the Times.

When JFK flew in for a campaign stop in Youngstown, Ohio, Ben drove over from Cleveland to be ready to greet the candidate. Waited on the tarmac, entered the plane, chatted with Jack, and was supposed to shake hands with Spoke as they both left the plane. But there was such a crowd, and JFK waved so happily at them, that he forgot to do the handshake. So Ben went to the campaign hotel and had a photo taken with the Senator.

Back on that plane in Youngstown. Upon seeing Spoke, JFK had said: "My wife is a great fan of yours."

He was never (according to him) a pacifist. We should have gone in against Hitler long before we did. And he supported NATO and even the Korean War. But this new war in Indochina was different and he sought some role in the peace movement. By the middle and end of the 60s, he was completely in it. But in 1960 he was worried about what the mothers who read his book would think. SANE (the National Committee for a Sane Nuclear Policy), its officers then seeking a reputation, invited Ben to be a sponsor of them. He said no. This is what he wrote:

I am in agreement with [your] policy.... But when I was first asked to participate in its work a couple of years ago I declined on the following basis: I have no expert knowledge at all about the relationship between radiation and health... If I were to take any official part in the work of the Committee I think that many parents would assume 1) that I was, to some degree, an expert and 2) that as an expert I was alarmed by the present dangers of irradiation.

To put it another way: I have tried as parent educator to be non-alarmish and I was to save my influence to use in areas in which I feel I have competence.... As you can see from my protesting I feel ashamed to turn you down, but I have to. I hope you ... will forgive me."