The 1960 Lincoln Continental had an engine that was 430 cubic inches - the largest in the industry. By '61 this car had hydraulic windshield wipers. They worked off the power steering pump, which was placed directly ahead of the engine so that it, in turn, worked off the crankshaft. Really unusual (and, shall we say, unnecessary). The electric window motors were sealed in liquid rubber and had stainless steel shafts. Each Continental was tested for three hours ("hot tested," meaning: someone drove it hard on the road), after which it was "torn down" for visual inspection. A computer-like device checked every electrical component. 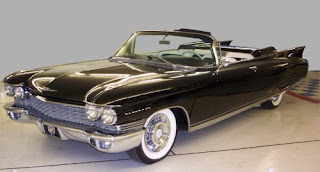 The 1960 Cadillac, on the other hand, was toned down from the '59 model. Thomas Bonsall's The Cadillac Story reports in this context that "the compact car boom was on; big and flashy were no longer 'in.'" Toned down? Big no longer in? Look at that car!

In any case, the folks at Cadillac didn't have to try as hard as before to win the luxury market: Imperial and Lincoln "had both largely self-destructed, and Packard had withdrawn from the highest end of the car-buying game.

But for all the talk of "the compact car boom," luxury models for 1960 still look (at least to us now) like the car of the 50s. They don't yet have that distinctive sixties look. Compare the big black machine above to the Corvette of '62, here at left. In design terms, the difference is epochal.

Does that mean 1960 is still old and '62 is new? In the auto industry, it seems to be the case. To be a little more specific: designers for the high end market still believed in 1960 that their wealthy constituents preferred to look back rather than forward for design, seeking reputation, solidity, proven status. Later these same folks would strive for the opposite values--the new, the untried, the with-it.

More in this sense (new-looking rather than traditional) like the Corvette, the "Corvair" was presented as a car for the 60s. The engine was in the back and it was poorly designed (unssafe at any speed, in fact)--but it sure looks "modern" in the 6-minute feature film (below). (Thanks to Tim Carmody who pointed me toward it.) This was the disastrous design that made Ralph Nader famous.