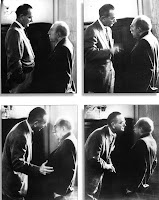 On May 6, Eisenhower signed into law The Civil Right Act of 1960, which did no more or less than establish federal inspection of local registration polls and create penalties for people who prevented a citizen registering to vote. (In the 1960 election, despite this new law and a civil rights bill passed in 1957, only an additional 3% of African American voters were added to the electorate.)

The real story of the 1960 act was what happened in Congress. LBJ, majority leader, prevented 18 southern Democrats from killing the bill by filibuster (they each took four-hour stints jabbering on the floor). He outlasted them procedurally and psychologically. John instigated round-the-clock sessions. He also had 40 army cots with bedding moved into Senate offices to ensure that 51 senators could be rounded up at any moment for an emergency quorum call. Eventually the Republicans--the Republicans--with an eye on the upcoming election, wanted some kind of civil rights bill passed that spring. LBJ worked with Eisenhower's attorney general, William P. Rogers (same man who was later Nixon's Secretary of State, the guy bypassed by Kissinger), to come up with a compromise bill, and that's the modest bill that was eventually passed.

LBJ was called "the southern Benedict Arnold" by the Florida Times-Union.

When it was done it had been the longest filibuster in history, lasting for 43 hours from February 29 to March 2. Johnson made sure that the bill was intact even after such a long "debate."

Above is the famous sequence of "Johnson treatment" photos taken for the New York Times.
Posted by Al Filreis at 9:10 AM