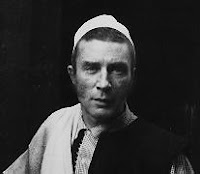 One day in late September 1959, Brion Gysin was mounting some drawings in his hotel room. Cutting the boards with his knife, he also sliced through a pile of old newspapers that he'd placed under the boards to protect his table. When he was done cutting the boards, he noticed that the New York Herald Tribune had been sliced in strips and that the words in print lined up and could be read across the sliced strips. This combined stories from different pages. He loved the results.

By the time William S. Burroughs returned to the hotel (he'd been lunching with reporters), Brion was almost hysterical with excitement about his discovery. The two began to experiment with the process, soon calling it "Cut-ups."

"Of course, when you think of it, 'The Waste Land' was the first great cut-up collage, and Tristan Tzara had done a bit along the same lines." He credited John Dos Passos as well - the Dos of "the Camera's Eye" sequences in USA.

Perhaps Burroughs' most significant conclusion: "A page of Rimbaud cut up and rearranged will give you quite new images - real Rimbaud images - but new ones."

Gysin was a great influence on Burroughs in 1959 and 1960 and later. He got him interested in the followers of Hassan (political cult --> assassinations --> hashish) and in the Church of Scientology too. 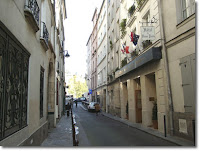 But back to Cut-ups. Minutes to Go, published in 1960, was the result of Gysin's turning WB on at the Beat Hotel. Burroughs: "Minutes to Go contains unedited unchanged cut ups emerging as quite coherent and meaningful prose. The cut-up method brings to writers the collage, which has been used by painters for fifty years. And used by the moving and still camera. In fact all street shots from movie or still cameras are by the unpredictable factors of passers by and juxtaposition cut-ups. And photographers will tell you that often their best shots are accidents . . . writers will tell you the same. The best writing seems to be done almost by accident...."

Later Burroughs taught cut-up technique to Genesis P-Orridge as a method for "altering reality". Burroughs' insisted that everything is recorded, and if it is recorded, then it can be edited. P-Orridge employed cut-ups as an applied philosophy, a way of creating art and music.

More on The Beat Hotel here.
Posted by Al Filreis at 8:06 AM