Meltzer's The Clown and the Semina circle 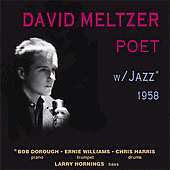 At left is an album cover: David Meltzer's jazz poems, 1958.

Meltzer published The Clown in 1960. It was issued by the Semina press. Jed Birmingham on REALITYSTUDIO.org has written about the Semina Circle and Meltzer, thus:

This mini-archive sat in my bookshelf for a couple of years untouched until January of this year when I purchased Wallace Berman and the Semina Circle. This book accompanied an exhibit relating to the literature and art surrounding Berman until his untimely death in 1976. This exhibit is currently touring the West Coast and will make its way to New York City (New York University to be exact) in January 2007. A complete run of Semina Magazine represents the Holy Grail for me as a collector. An early fragment of Naked Lunch (Pantapon Rose) appeared in Semina 4. As I have mentioned before, Semina is the epitome of the little magazine as art object. David Meltzer appeared in Semina as well. In fact, the entire issue of Semina 6 features Meltzer’s The Clown.

Unlike Burroughs, Meltzer was an intimate member of the Berman Circle. He published a few books including Luna with Black Sparrow. In the late 1960s, he wrote a series of avant garde pornographic novels for Essex House. At the same time, he fronted the psychedelic band Serpent Power. In 2004, Meltzer published Beat Thing. He also edited two collections of valuable interviews entitled San Francisco Poets and San Francisco Beat. A collection of Meltzer’s papers are at Washington University.
Posted by Al Filreis at 7:36 AM