understanding poetry (or not, as the case may be) 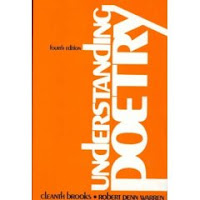 The third edition of the for-the-classroom anthology, Understanding Poetry, by Cleanth Brooks and Robert Penn Warren, was published in 1960. I've made a blog entry here. (The jacket depicted at left is the 60s-style fourth edition. I'll eventually replace it with the third.)

What interests me for the moment is the way the editors dictated the order in which a poem of historical or political significance should be treated in the classroom. What was "prior" was the poem as a poem; then and only then could it "offer illumination" as a "document." Such illumination was possible, at least in the abstract, but literary significance must be comprehended first.

And never mind the notion--which, in the late 30s when the first edition was published, was of interest to a number of poets ranging from Reznikoff to Rukeyser to Pound to Norman Rosten--that a poem could consist of documents or be a kind of document itself. I wonder whether the 1960 accounts for this possibility. I'll soon be reading the new preface and will report back.

[] "Poetry gives us knowledge. It is a knowledge of ourselves, in relation to the world."

[] "[W]e miss the value of poetry if we think of its characteristic knowledge as consisting of 'messages,' statements, snippets of doctrine. The knowledge that poetry yields is available to us only if we submit ourselves to the massive, and subtle, impact of a poem as a whole."

Snippets of doctrine are bad: this of course ignores the entire tradition - yes, by 1960 it's an well-tried manner - of collage, wherein pieces of others' statements can be included in the poem without the assumption of a subject (subject position) necessarily aligned with it.

You can't feel the aura of a poem unless you submit. Submit to what? A thing that is massive and yet subtle. (As opposed to massive and unsubtle, which is the effect of messages, statements and even snippets of doctrine.

Whole: ditto the point about snippets. Wholes, not parts.
Posted by Al Filreis at 10:29 AM