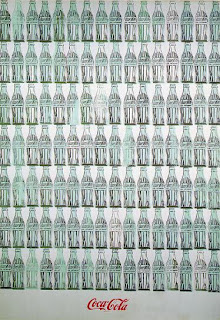 Summer of '60, breakthrough time for Andy Warhol. One night the filmmaker Emile De Antonio went over to Andy's studio and they had some drinks and Warhol began showing him two large paintings, side to side, on the wall - showing them to his friend more seriously than usual. Two pictures of Coke bottles about six feet tall. One was a "pristine" black-and-white Coke bottle. The other "had a lot of abstract expressionist marks on it." De Antonio described for Andy his preference for the "absolutely beautiful and naked" b&w canvas and told him to destroy the other.

Warhol at this point had a strong interest in American folk art and wanted to paint 20th-century folk objects like Coke bottles just the way they looked. Yet he worried that people would reject the work as that of a commercial artist. It was at this time that he began to overcome that fear.

Around '60 he began also to alter the way he spoke, now mumbling monosyllabic replies to questions. And he walked with a limp-wristed dancer's walk, what a biographer calls "a bizarre takeoff of Marlon Brando and Marilyn Monroe."

Ivan Karp, who was an assistant to Leo Castelli, began coming by and taking an interest in what Warhol was doing. Karp wore dark Kennedy-style suits, sunglasses, smoked cigars and called everyone "baby." He spent '60 in and out of W's studio. It wasn't until January '61 that Karp finally persuaded Castelli to come to Warhol's house. The first visit: Castelli comes to the door and Andy opens the door wearing one of his 18th-century masks.

Castelli didn't bite quite yet, though. Karp recalls: "Leo said, if we were interested in Roy [Lichtenstein], could we really be legitimately interested in Warhol?" Andy came to Leo's office a few days later and said, "You're mistaken. What I'm doing will be very different from what anybody else is doing. I really belong in your gallery." Leo said no again and Andy cried out: "Well, where should I go?" and also: "You will take me. I'll be back."

Leonard Kessler also ran into Warhol in 1960. Warhol was coming out of an art-supply store carrying paint and canvas. "Andy! What are you doing?" Without skipping a beat, Warhol said, "I'm starting pop art."

Kessler asked why. "Becauase I hate abstract expressionism. I hate it!"

A few weeks later Ted Carey praised a Rauschenberg collage at MoMA and Andy's rejoinder was: "That's nothing. That's a piece of shit!" 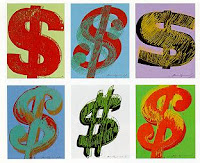 The term "pop art" had been around since 1958, but everyone seems to agree that Warhol began pop art for real in 1960. To do it he applied what he had learned from television and advertising. Subliminal message: sexuality without gratification. Content: dollar sign, gun, supersweet drink, fizz, etc. Do what artists are supposed to not want to do: make ads.

1960 was the year he invented pop art but it's also (perhaps not coincidentally) a time when he spent perhaps half the year having a nervous breakdown. At least that's what he called it.

Victor Bokris, in his bibliographical biography, presents this chapter title: "The Birth of Andy Warhol, 1969-61." Pop art, Bokris writes, came with it an "up attitude" and was a "tough celebration" of American culture, and he contends that its products record the early 1960s "more accurately than movies and television."

Among the sources here: Victor Bockris, The Life and Death of Andy Warhol, 1989.
Posted by Al Filreis at 7:39 AM