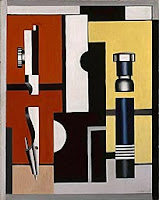 G. David Thompson, a Pittsburgh millionaire, 61 years old in 1960, had been collecting modern art for twenty-five years by then. Klees and Giacomettis were all around the house. He owned Leger's Composition with Three Sisters. And a Juan Gris still-life: "A friend of mine owned this," he said of the Gris. "He was dying to buy a Braque but didn't have the ready cash so I bought this to help him out. No great favor--I liked the painting." At least one Mondrian. And so on.

In '59 he offered the entire collection to the city of Pittsburgh, and he threw in the house too - which the city, he said, could use as a ready-made museum.

Pittsburgh said no. Not interested. Thanks, but no thanks.

Angry and lovin' a deal, Thompson promptly sold 97 - that's 97, yes - of his Klees to a dealer for more than $1 million, and then began to buy little-known moderns. After selling the Klees, he said: "I want to enjoy once more the pleasure of bare walls waiting for new pictures."

(In '61 the Guggenheim put up a show called "One Hundred Paintings from the G. David Thompson Collection." It's easy, especially now, to gloat about the wisdom of the Guggenheim people or of the New York museum-going public: they, after all, wanted what Thompson was doing. This entry isn't meant to speak one way or the other to that. Rather, I'm thinking about what happens when a philanthropic gesture is undervalued or misunderstood. What does the philanthropist do in response? After all, he or she is typically - let's admit it - someone who is used to getting his or her way. Is pique the right reaction? Was Thompson perhaps in the wrong place? Or is it apt for him to stick it out, hoping for a better day?)

Above: Leger's "The Compass" (1926). Thompson bought this Leger from Buchholz Gallery in New York in 1953. He owned it for the rest of his life. It was sold by Parke-Bernet in '66 after Thompson's death in '65. It is now at the Art Institute of Chicago.