Noam Chomsky and his wife Carol parented three children. The first two were born during the period that interests me. Aviva (b 1957) later became an academic, like dad, but her specialty was Central American history and politics. Diane was born in 1960 and later, among other things, worked for a development agency along with her Nicaraguan companion in Managua.

B.F. Skinner, at the time of Chomsky's emergence, was the dominant theorist of language as behavior. Chomsky's repudiation of Skinner's theory came (famously) in his review of Skinner's work in 1959. (This was: "A Review of B. F. Skinner's Verbal Behavior" in the widely read linguistics journal Language.)

Readers of this blog – you're perhaps more than casually interested in what happened in 1960, at least I'm hoping – will know at least the gist of the above, particularly, I suppose, the news of Chomsky's hit on Skinner. You might not know, though, that Chomsky's father was a noted Hebrew scholar. Most people who have thought about Noam Chomsky's life and work do believe that the father's work on Hebrew as a language had a great impact on Chomsky's youthful interests. The elder Chomsky didn't just study Hebrew as a language, and of course language study and linguistics are by no means the same thing. But the old man did scholarly work on medieval and historical Hebrew grammar and young Noam knew Hebrew grammar as a child, long before he even knew that linguistics was a discipline.

Chomsky grew up with English and Hebrew. He also learned classical Arabic and some French and German a little later.

1959, at the Institute for Advanced Studies, Princeton: Noam stood in front of a blackboard with the following two line poetic bit of didacticism behind him scrawled in his handwriting in chalk:

There it is: syntax versus semantics, in a nutshell, in a bit of poetic synaesthesia.

The kind of linguistics Chomsky conceived in this period concerned itself with matters so utterly different from those studied by his colleagues that one could say that Chomsky invented a completely new field or that he was from the start working in a separate one. But Chomsky insisted on showing the links between what he was now saying and the ideas of others over hundreds of years. This – the effort to link his radical approach to the past – made it all the more revolutionary and disconcerting.

Skinner's 1957 book, which Chomsky reviewed in 1959, was the first large-scale effort to incorporate major aspects of linguistic behavior into the realm of behavioral psychology. The field of linguistics had to respond. That Chomsky did so clearly and dramatically – and negatively – made him instantly famous in the two fields. 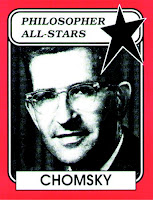 What surprised Chomsky was how limited and how simplistic was the nature of the "function" producing behavior. You had to rely on knowing inputs from outside (such as they could be controlled for the purpose of study – such as reinforcements) and you had then to rely on outputs (or behaviors) and to believe you could know what the outputs are or mean or indicate. The limitation was necessary because Skinner had no access to "the internal structure of the organism" (27); he had to remain outside. His confidence was undue in general, but when he moved to linguistic behavior, the dependency on observing inputs and outputs really becomes deficient. Skinner compensates for arguing ever more adamantly (and repeatedly) that "external factors consisting of present stimulation and the history of reinforcement…are of overwhelming importance" in understanding human behavior (27-28). "The magnitude of the failure of this attempt to account for verbal behavior serves as a kind of measure of the importance of the factors omitted from consideration, and an indication of how little is really known about this remarkably complex phenomenon" (28). 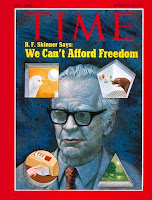 Linguistic behavior – what we write, what we say, what we mean to mean – cannot be predicted by inputs, nor understood as behavior by recording outputs, especially if the latter is assumed to be understandable/translatable through conventional means (denotatively, lexicographically, etc.). Even efforts (not Skinner's – he didn't or couldn't do this, but efforts by real linguists) to create a unifying theory of language behavior from the inside, "conceal complexities" (56). Since the behavior of the speaker, listener, or learner of language constitutes the actual data for any study of language, that's where we need to go, but we also need to be skeptical of empiricist confidence of the sort Skinner evinces. "The construction of a grammar which enumerates sentences in such a way that a meaningful structural description can be determined for each sentence does not in itself provide an account of this actual behavior. It merely characterizes abstractly the ability of [a person, a regular user of the language] who has mastered the language to distinguish sentences from nonsentences, to understand new sentences (in part), to note certain ambiguities, etc. These are very remarkable abilities."

"Does not in itself provide an account…" "Very remarkable…" Grammars inevitably "conceal complexities…." Perhaps this is why Chomsky in this period so intriguingly and frustratingly chalked gnomic poems on chalkboards: