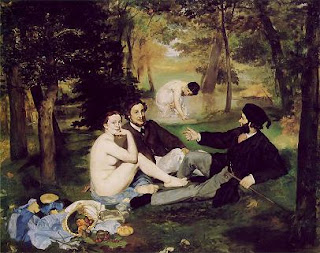 The story goes that when Manet was by the Seine near Argenteuil one day, he noticed some ladies bathing and said: "It seems I must do a nude. All right, I'll do one for them...in the transparent air, with people like those we can see over there. They'll slay me for it but let them say what they like." The result was The Picnic or Luncheon on the Grass (Le Déjeuner sur l'Herbe) of 1862-1863.

Between 1959 and 1961 Pablo Picasso did a series of sketches and paintings based on this alluring painting by Manet, and one other (Le Viex Musicien). Despite the originary tale of the painting retold above, Manet's composition of this landscape with figures had already been borrowed from Giorgione's painting (in the Louvre), La Fete champetre.

Pastoral landscape is rare for Picasso. We don't have much evidence to explain this burst of affection for Manet, nor for this obsession, which struck him at around 80 years of age, for these figures. We do know Picasso had always admired Manet, and he had even parodied Manet in his Olympia way back in 1901.

Here are three of Picasso's versions of the scene (the second I know to have been painted in '60; the third is from '61): 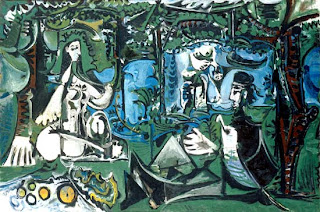 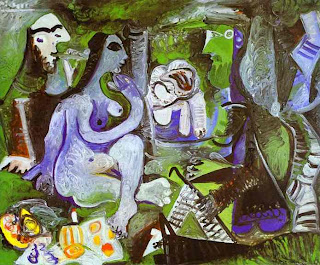 Much of the 1959-61 period he spent at Vauvenargues--as he was in February 1960 when he worked on this series with an energy that surprised even him. In these sketches, some of which are very large (51 x 76 inches), Manet comes and goes. In '62 an exhibit of this series was mounted in Paris, and the catalogue--stunning--is this: Peintures Vavenargues, 1959-61, Galerie Leiris, Paris.

At this time there were actually five major exhibitions. One was a show of vigor and gaiety, "Forty-five engravings on linoleum," the result of experiments and discoveries that Picasso had made in the simple process of lino-cuts.

In the fall of '60 there was a show of drawings made in the previous two years. The main themes were the "gallant picadors, favorites of the great ladies," the latter included flemenco dancers, witchy peasant women in towering mantillas, wearing flying whirling skirts, etc. Biographers talk of a new nostalgia for Spain emerging in him. 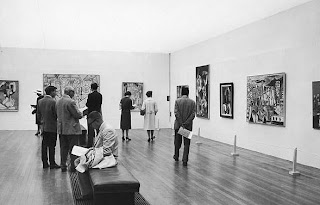 The big event at this time was a huge show honoring Picasso in London, also in '60. This was to date the largest Picasso exhibit ever. The Tate Gallery gave up more space for it than it had. Some 280 paintings by a single artist, including early pieces such as Demoiselles d'Avignon and ten canvases dating from 1900 to 1909 lent by the Russian Government. Almost half a million people visited the show in London, with the press now acclaiming Picasso unanimously as the great genis and even the Queen herself, during a private visit to the show, said Picasso was the greatest artist of the century. Picasso himself refused to go: "Why should I go? I know them all, those paintings, I did them myself." Above: the Picasso show at the Tate, 1960.

And then there was the monument for Apollinaire, who had died of the Spanish flu way back in 1918. The poet's friends and the French authorities had been haggling about this for years and years (the original commission dates to the 1920s). (Perhaps the continuing official ban on A's well-known erotic novel, The Eleven Thousand Rods [Les Onze Mille Verges], which was not lifted in France until 1970, had something to do with the delay?) The question for friends and officials both to answer was: What was the most appropriate monument to Apollinaire's memory and where should it go? Finally it was decided to accept Picasso's offer of the large bronze head of a girl, inspired by Dora Maar in 1941. Permits and formalities

were complete in 1959, and with due ceremony and a great deal of emotion, the poet's old friends, Andre Salmon, Jean Cocteau, and others, including Picasso himself--and A's widow--the sculpture was unveiled at the corner of the churchyard of St. Germain de Pres on one of the shortest streets in Paris, which had been named "rue Guillaume Apollinaire." (See the map below.) One Picasso biographer puts it: "At last Picasso's tribute to the most eloquent and revolutionary friend of his youth stood modestly shaded by chestnut trees, backed by the walls of the old monastery and surrounded by children at play."* 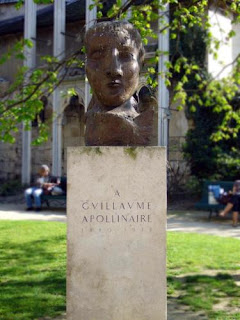 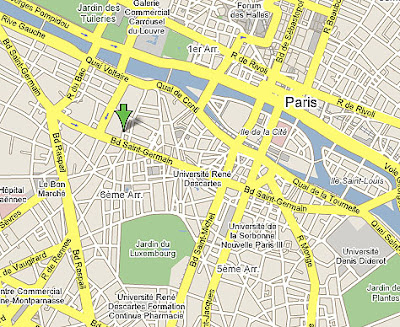 * Roland Penrose, Picasso: His Life and Work, 440-41.
The lines quoted above are from the poem "Zone," translated by Donald Revell.
Posted by Al Filreis at 8:04 PM