the language is ours 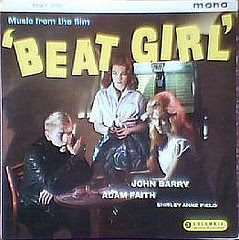 Now back to our movie. Dad’s been away for 3 months, picking up a young French wife (she’s 24) who is now, back home in London, a step-mother to Jennifer, the angry daughter. Angry about the divorce, angrier still to have this young step-mother around.

Dad’s house is modern and he – Paul – is explicitly a modernist. He’s an architect, talks incessantly about the "modern way we live." In the living room, otherwise appointed with modern furniture and cubistic paintings and a cool-looking recessed TV, is a large model of “City 2000,” which he keeps under a cover – perhaps only to keep himself from obsessively talking about it.

He and his daughter both say that he loves one thing unconditionally, and that's City 2000.

Step-mom – her name is Nichole - feels it’s time for someone to go upstairs and say goodnight to Jennifer; Modern Dad says “Oh, she’s used to taking care of herself” and would rather his new wife hear all about City 2000. His speech about the city includes statements such as these:

“It’s a city, lots of residents, and yet it’s easy for anyone to feel utterly alone in it.”

"None of this cluttered, hodge podge sort of design. This city is clean, clear lines, totally organized.”

Get the picture? Yes, the modernist is inhuman and committed to social theories to the exclusion of his own kin. His ideas about how people live have caused his daughter to "rebel." She embraces...a more human aesthetic which she finds in London spaces that are the opposite of City 2000, cafes (literally) in caves under the city. 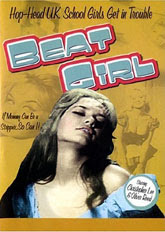 At home Jennifer is cold, and she is cruel in responding to her new mom. She’s not much warmer to dad. The three, this new family, retire for the night - their first night together under one roof. But in an hour or so… Jennifer puts on her beatnik clothes and sneaks out to a cave club with loud lazy but strongly percussive jazz and at least one guy wearing Jack Kerouac’s plaid flannel shirt.

What are Jennifer’s politics? Well, the movies’ version of Beat politics. Here’s Jennifer on cold-war atomic one-ups-manship: “Next week - boom! - the world goes up in smoke. And what's the score? Zero!”

When Nichole comes to Jennifer’s art school to pick her up for lunch, she can’t find her. Another student, when asked, knows her as “that crazy girl who’s gone in for those beatniks.” Nichole doesn’t understand the term “beatnik” and asks. “Oh it’s an awful thing that’s come over here from America” and tells Nichole that Jenny can probably be found at “a café in SoHo called ‘The Off Beat’ – she’s always there.” Nichole finds Jenny and her friends at the cafe. The beat guys thing step-mom is pretty sexy, though uncool, but Nichole is mortified that dad's new wife has entered her separate scene. 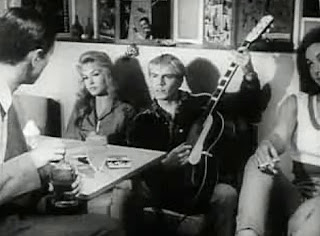 One night, after Jenny has returned home late, she and Paul have a 3 AM argument. Jenny calls him a “square” and he’s incensed: “This language! These words! What do they mean?!” Jenny exclaims that such a language “is ours.” “It comes from us. We didn’t get it from our parents. We can express ourselves and they don’t know what we’re talking about.”

Paul: “Why do you need to feel so different?”

Jennifer: “It’s all we’ve got. People like you build cities, but you don’t know the first thing about us – we who have to live in them.”

Later the kids are in another cave club, apparently some reclaimed spot in the underground, a WW2-era bomb shelter. The London beat scene has set up their pads in the very places where their parents once cowered from nightly attacks by the Luftwaffe. They get to talking and one of the guys tells his story: he was literally born in an underground shelter during the war. “My old lady was bombed out, we had no place to live, so I was born here and we lived here.” He knows it’s an irony that England has come so far from those dark wartime days and yet here they are, choosing to be back down there. “Like a bunch of scared rats underground.” Does he mean their parents’ generation – scared of wartime enemies? It’s not clear. Then another beat boy muses. His mother was killed in the bombing of London; his father was an army general and now the boy feels somehow that his father was responsible for all this militarism even as he acknowledges he was in Italy fighting the Nazis. Then Jenny says, “I like it here. This is my home.”

One of the posters for this film, showing Jenny as a doped-up sexpot, reads, "Hop-Head UK School Girl Gets in Trouble." But Jenny's not hopped on anything (or if she is "hopped" it's caffeine, since at the Off Beat they drink coffee). Far from wanting to wander, she only wants a home...so long as it's not the home of her cold modernist father dreaming of the city of the year 2000. That city is the one that he hopes will sweep away London as it really was. Jenny feels more at "home" in the underground, back at the scene of the society's moment of greatest realness and vulnerability--and, psychologically, at the point just prior to the fragmentation of the family.
Posted by Al Filreis at 10:58 PM