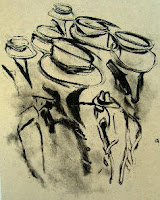 "Personism has nothing to do with philosophy, it’s all art."

That's Frank O'Hara, of course, in his partly ironic and party straightforward "Personism" manifesto. It's personal and impersonal, chatty and abstract. It creates its own I-do-this-I-do-that history. "It was founded by me after lunch with LeRoi Jones on August 27, 1959, a day in which I was in love with someone...."

How much mock manifesto is personism? Could it be merely the aesthetic ideology of the artist who was a "coterie" of people being...well...human beings - being the sort who found (that grandiose term) movements (more grandiosity) after lunch (a key O'Hara I-am-just-a-person moment) on a day in which he is in love (another set-piece O'Hara mood)?

Thanks to David Slarskey.
Posted by Al Filreis at 6:04 PM