counting the day's writing in feet

For a good part of 1960, Lew Welch lived with his mother in Reno. He spent most of his days writing, somewhat in the manner of Kerouac: typing on a teletype roll and counting his day's work in feet. On February 8 he wrote a letter to Kerouac himself: "I can't write as fast as you--maybe cause I can't type that fast. So if I get 5 feet on a good day it is about the limit."

His poem Wobbly Rock was just then being published in San Francisco, and here he was in Reno, writing a novel with the tentative title, "I, Leo" (the title was his mother's idea).

And he was reading: Sons and Lovers, Nausea, The Sun Also Rises, William James's Varieties of Religious Experience, and, for the first time, all of Whitman's Leaves of Grass. He also read Ti Jean's Dharma Bums, a couple of Zen books, and a biography of Hart Crane ("sad").

He and Kerouac, in March, were to take "our huge trip in the woods." But later, in a letter of early April, Welch explains to Kerouac why he wasn't able to go. He was suffering from cirrhosis of the liver, and "stopped drinking altogether" and went to a doctor who told him to "eat and eat and eat."

In mid-May, still in Reno, he wrote to "reintroduce" himself to William Carlos Williams. Back in 1950, when Welch was just a kid, he met 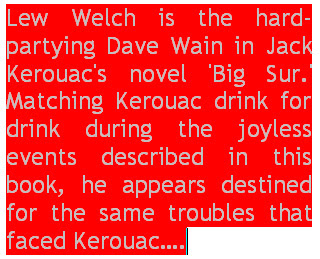 WCW at Reed College in Oregon, and spent an afternoon with the poet and Flossie. After WCW's westward trip was done, the two traded letters for several years, until Welch "cracked up in Chicago." "From then on it's the same story: learning, in America, how to crack out not up." He'd been reading WCW's autobiography and sensing how tough it was for WCW in the "bleak 30s and 40s--when the poem was the only food for

the new hyenas of criticism."

By the end of May he's pleased to hear from Philip Whalen that Charles Olson had told Dave Haselwood that he (Olson) admired Wobbly Rock. By the end of July, still living with his mother, he sends a copy of his book to Marianne Moore, whom he has happily read for years.