can history show us nothing but pieces?

Last night we sat with the stereopticon,
laughing at genre views of 1906,
till suddenly, gazing straight into
that fringed and tasselled parlor, where the vestal
spurns an unlikely suitor
with hairy-crested plants to left and right,
my heart sank.

It's Adrienne Rich, still writing in her premature style. Here is another long subjective-lyric sentence, starting out with time/place, then musing through verb-led clauses (laughing, gazing), until grammatical subject/object (heart/sank) emphatically finish it off. Periodic. Yet it was, somewhat daringly, writing about history--daring certainly for a woman poet, daring perhaps in context--she read it as "the poet," not to say "the young lady poet," after the more rooted speech by an academic straightforward literary historian and biographer.

A little later in her poem, in its fourth of six sections, called "Consanguinity," we have:

Can history show us nothing
but pieces of ourselves, detached,
set to a kind of poetry,
a kind of music, even?
Seated today on Grandmamma's
plush sofa with the grapes
bursting so ripely from the curved mahogany,
we read the great Victorians
weeping, almost, as if
some family breach were healed.

Yet it's not even clear if the poet, or we, or the Victorians, or all, are weeping. 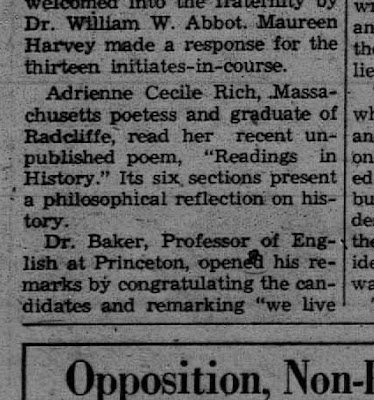 At the College of William and Mary, each year the exercises of the Phi Beta Kappa chapter there feature a lecture and a poem. In December of 1960 the lecturer was Hemingway biographer Carlos Baker, of Princeton, and a mostly unknown poet named Adrienne Cecile Rich. She read her six-part poem, "Readings of History"; it was later published in Snapshots of a Daughter-in Law: Poems 1954-1962. The student newspaper, The Flat Hat, ran stories before and after the event.
Posted by Al Filreis at 11:47 AM