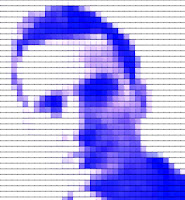 Lew Welch's Wobbly Rock is published by Auerhahn Press in '60.

Welch entered Reed College in 1948, and the following year moved into a house with Gary Snyder; the following year they were joined by Philip Whalen. By the fall of 1949 Welch was co-editor of the school's literary magazine and was writing constantly. He wrote his senior thesis on Gertrude Stein and graduated in 1950.

For a number of years Welch showed his poetry only to close friends. With the emergence of the Beat movement, however, Welch's friends Philip Whalen and Gary Snyder began receiving national attention. Welch's desire to devote himself completely to his poetry was revived. He transferred to the Oakland office of Montgomery Ward and soon became a part of the San Francisco poetry scene. In 1958 he was fired from his job. His marriage fell apart soon after.

At the same time, however, Welch's poetry was beginning to meet with some success. Donald Allen included one of Welch's poems in The New American Poetry (1960). His first book Wobbly Rock was published just then. He was drinking heavily during this time, but he continued to write extensively. For a time he lived with his mother in Reno, Nevada, and then in a cabin in the Trinity Alps. He moved back to San Francisco in 1963, and in 1965 published three books.
Posted by Al Filreis at 11:51 AM