we need the sense of one voice speaking

In 1960 "serious" literary critics were still debating imagism. Actually in several belated critical attacks on imagism, I realize that imagism stands in for all of poetic modernism (quite a leap but handy for the anti-modernist). Graham Hough, then a Fellow of Christ's College, Cambridge, delivered a series of lectures at Catholic University in 1959; the university press published these in 1960 under the heading Reflections on a Literary Revolution. 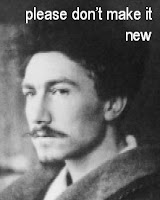 In his lecture called "Imagism and Its Consequences," Hough announced: "I should like to commit myself tothe view that for a poem to exist as a unity more than merely bibliographical, we need the sense of one voice speaking, as in lyric or elegiac verse; or of several voices intelligibly related to each other, as in narrative with dialogue or drama; that what these voices say needs a principle of connection no different from what which would be acceptable in other other kind of discourse; that the collocation of images is not a method at all, but the negation of method. In fact, to expose oneself completely, I want to say that a poem, internally considered, ought to make the same kind of sense as any other discourse" (pp. 34-35).

So much for poetry's formal difference from other kinds of discourse.

And never mind that in fact imagism was a poetic method as (originally at least) focused and clear as any poetic -ism ever promulgated. Anyway, a negation of a method is itself a method, especially if that negation is a conscious principle of procedure.

And one can be glad that two voices are permitted, but of course they must be set in intelligible relation. Who's to say what is intelligible about a relation between two people talking?

Graham Hough (elsewhere) also said: “The fact that poetry is not of the slightest economic or political importance, that is has no attachment to any of the powers that control the modern world, may set it free to do the only thing that in this age it can do -to keep the neglected parts.”
Posted by Al Filreis at 7:48 AM