wants to destroy art for himself

Marcel Duchamp in this year. Nothing has been about him, notwithstanding his age and the remoteness by now of the moment when he first appeared on the scene. 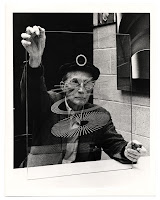 In the rapidly commercializing field of contemporary art, he was a more and more visible presence. He served on exhibition juries, gave interviews, organized and installed the Surrealist group show at D'Arcy Gallery which has already been mentioned here, and accepted invitations to lecture about his work, a feat he discovered he could manage easily. In '60 he was elected to the National Institute of Arts and Letters (amazing, when you think of how staid that organization was).

"I'm nothing else but an artist, I'm sure," he said in '61 in a filmed interview for the BBC, "and delighted to be.... The years change your attitude, and I couldn't be very iconoclastic any more." I haven't seen the film, but reading this in print it strikes me that he couldn't have been serious in saying this, however much things had changed. He changed his anti-art rhetoric somewhat, but more, it seems, to suit the times than to express a major change in himself. At a symposium at MOMA (an event that was part of William Seitz's huge "Art of Assemblage" exhibition), he was asked, "Did you, or do you, really want to destroy art?" Duchamp's answer was: "I don't want to destroy art for anybody else but myself, that's all."