can't write with his woman proximate 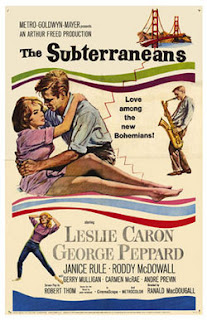 Summer '60: a Hollywood version of Kerouac's The Subterraneans is released, starring George Peppard. Philip Sheuer's review in the Los Angeles Times was given the headline, "Sensitive Film Tale Views Gropings of Beatniks" and indeed the photo designed into the story shows Peppard grabbing Leslie Caron hard from behind. "Even MGM is worried. Apparently fearful that the people, or squares, who might otherwise be attracted to the theaters, won't go." The studio used this phrase in its PR: "Today's Strange Young Rebels." Then Scheuer: "I'm not sure that I savvy what all the whoop-te-do is about."

The PR tagline in full: "These are The Subterraneans. Today's Young Rebels - who live and love in the world of their own. This is their story told to the hote rhythms of fabulous jazz."

Roddy McDowall (later an ape) makes an appearance as a poet-saint who can sleep standing up. And Arte Johnson (later of Laugh In) plays Arial Lavalerra, "a beat but not beaten Oscar Wilde--San Francisco style."

A. H. Weiler in the New York Times focuses on the sexual problems associated with this kind of writing. "Our hero finds he can't create his kind of iridescent prose with her [the Leslie Caron character] in close proximity."