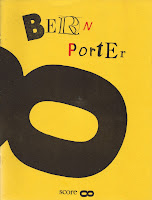 One of the treasures of PennSound is a long interview/conversation with Bern Porter conducted by his long-time friend and collaborator Dick Higgins. There are two parts of the sound file. At around 34 minutes into the first recording, the two begin to talk about their first collaboration - and then, later, their first meeting - in 1959-1960.

Bern Porter and Dick Higgins first made contact with one another in 1959. Ray Johnson and Bern had been exchanging items through the Mail Art project, Ray sending collages, Bern altering them somewhat and sending them back. Bern was living in Maine at this point, having come back to the U.S. from Tasmania. Young Dick Higgins, about to go off to printing school, was given by Ray Johnson a brochure by Bern Porter that Bern had sent (something Bern had produced in 1947).

Dick loved the pamphlet and sent Bern some of his manuscripts. Bern loved them and wrote immediately back, inviting Dick to contribute to "Bern Porter Editions."

Dick sent Bern the manuscript of What Are Legends. Bern hand-lettered the book and Dick took it to the printing school, where it was printed with Bern's illustrations. This was in 1960. 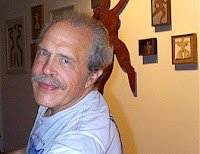 One of Higgins' obits began this way: "DICK HIGGINS'S first book was entitled What Are Legends: a clarification. Higgins was himself a bona fide legend, for the books he published rather than wrote. A seminal figure in the Sixties avant-garde, in that astonishing decade of innovation and experimentation whose legacy seems dimmed today by a return to formalism, he was typically protean: poet, performer, composer, visual artist and filmmaker. Yet it was as founder, designer and publisher of the Something Else Press that he remains best known."
Posted by Al Filreis at 8:23 PM