the Confucian side of Disney 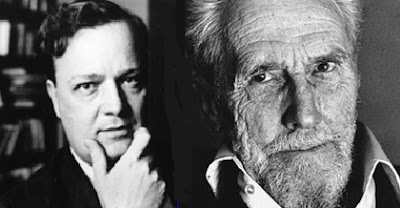 Early in 1960 the young poet Donald Hall managed to interview Pound in Italy. Harry Meacham had recommended Hall to Pound, and the old tired poet knew that Hall had recently interviewed Eliot. Hall found that Pound's eyes were watery, red, showed fatigue. Pound said, on greeting the young poet (I think Hall put this in a poem): "You -- find me -- in fragements." During three days of interviews (add a fourth day, the first, when they met and spoke for an hour), Pound's voice was theatrical and stayed high in each sentence until the very end, when it fell. He had bursts of energy, even paced the room, until suddenly his faced sagged and he felt flat, eyes glassy, out of it. After one callapse, Pound recovered a bit and begged Hall: "Don't -- let me sound -- so tired."

Yes, this was in 1960. When finally Hall published an edited version of the interview in Paris Review, it was already '62.

Hall: It must be thirty or thirty-five years since you have written any poetry outside the Cantos, except for the Alfred Venison poems. Why is this?

Pound: I got to the point where apart from an occasional lighter impulse, what I had to say fitted the general scheme.

H: Do you think that the modern world has changed the ways in which poetry can be written?

H: Did anyone ever help you with your work? ...I mean by criticism and cutting.

P: Apart from Fordie [Ford Madox Ford], rolling on the floor undecorously and holding his head in his hands, and groaning on one occasion, I don't think anybody helped me through my manuscripts. Ford's stuff appeared too loose then, but he led the right against tertiary archaisms.

H: How did you get started being a poet?

P: My grandfather on one side used to correspond with the local bank President in verse....

H: Can a man of the wrong [political] party use language efficiently?

P: Yes. That's the whole trouble! A gun is just as good, no matter who shoots it.