did Lowell mean himself to be "raw" or "cooked"? 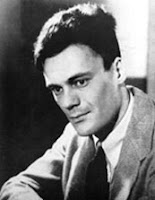 Robert Lowell's book Life Studies, published in 1959, was given the National Book Award of poetry in April 1960. The party celebrating the awards - for Lowell as well as Philip Roth in fiction for Goodbye, Columbus and Richard Ellmann for his James Joyce biography - was held at the Grand Ballroom of the Hotel Astor. the jury said that Lowell's poems were "of fierce and immediate compassion...[striking] through the private dimension to document the pressures of an age." Not the individual mania but "the age."

Lowell's acceptance speech made a distinction between the kinds of contemporary poetry - raw and cooked. More about that in a moment. A journalist at the Astor party approached Lowell and asked him to enlarge on the distinction between raw poetry and cooked. "I'm not going to comment on something I haven't actually said yet," replied Mr. Lowell. Then Lowell, "his Yankee jaw stiffening," smiled and "even cracked a couple of homely jokes, for all the world like a Harvard Will Rogers."

The main address of the evening was given by Dr. Mason W. Gross, president of Rutgers University, who warned his audience that civilization was going to drown soon in a sea of increasingly meaningless words - presumably, though those gathered, he didn't mean Roth's, Lowell's or Ellmann's. Gross became and assistant professor of philosophy in '46 after fighting in the war, and moved quickly up through the administrative ranks, having become president in 1959, not quite a year before delivering this speech. But his gloomy prediction that we would drown in meaningless words might have struck some at the Astor as odd coming from the man who in the late 40s and mid 50s was widely known from his role as a panelist on the TV quiz show, Think Fast (1949-50) and the show Two for the Money (1952-55). This was the man worried about being awash in a sea of meaningless words?

Here is part of Lowell's speech, with his "raw/cooked" comment:

Our modern American poetry has a snarl on its hands. Something earth-shaking was started about fifty years ago by the generation of Eliot, Frost and William Carlos Williams. We have tried a run of poetry as inspired, and perhaps as important and sadley brief as that of Baudelaire and his successors, or that of the dying Roman Republic and early Empire. Two poetries are ever competing, a cooked and a raw. The cooked, marvelously expert, often seems laboriously concocted to be tasted and digested by a graduate seminar. The raw, hugh blood-dripping goblets of unseasoned experience dished up for midnight listeners. There is a poetry that can only be studied, and a poetry that can only be declaimed, a poetry of pedantry, and a poetry of scandal. I exaggerate, of course. Randall Jarrell has said that the modern world has destroyed the intelligent poet's audience and given him students. James Baldwin has said that many of the best writers are as inarticulate as our statesmen. / Writing is neither transport nor technique. My own owes everything to a few of our poets who have tried to write directly about what mattered to them, and yet to keep faith with their calling's tricky, specialized, unpopular possibilities of good worksmanship...."

Lowell is semi-coherently referring to the Beats (those who can only declaim their poetry - raw) and the so-called New Formalists (producers of New Criticism-friendly, wrought verse). And he clearly wanted to stand apart from these two schools, obviously concerned that the alleged directness and psycho-emotional frankness of Life Studies might lead folks to put him with the former, while also wanting the book to declare his separation from the merely academic qualities of the latter. Yet in saying this in so quick and dirty a form - and this is the reason why I like to read such occasional speeches - he reveals a sense of his poetics with respect to the major modernists. The clever "yet" in the final sentence quoted above is thick with meaning not quite fully intended.
Posted by Al Filreis at 7:47 AM