make it new...over a campfire in the morning 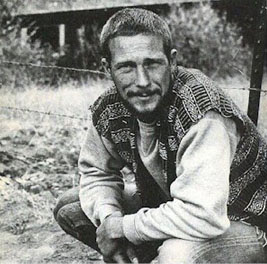 I've never taken the time to understand why so many poets and critics and literary historians I respect say that Gary Snyder's Myths & Texts, published in 1960 by Totem Press (later republished by New Directions), was (and I suppose, they mean, is) such an important book. Perhaps Snyder got into this beautiful Totem Press edition because he'd already been publishing in the right places; the poems in the book had been printed in Black Mountain Review, The Fifties, Yugen, Jabberwock and elsewhere. His commitment to the natural setting seemed otherwise not to fit so well with the aesthetic and personal tone set by so many of the New American poets. A later introduction spoken of how the book's "several rhythms are based on long days of quiet in lookout cabins," and such.

Snyder believed in the importance of belonging to a place, knowing and respecting its culture. "[W]e are most of us a still rootless population of non-natives who don't even know the plants or where our water comes from." This is an ethical matter for him. (Think about how differently Wallace Stevens meant such a statement about being native in one's world. So different!)

Jerome Rothenberg's emergent sense of ethnopoetics, his appreciation of the primitive (he embraced the very term--a term that made and makes others nervous), certainly coincided in part with what Snyder was doing, although the two poets wrote in such distinct ways, with Rothenberg more openly committed to the modernist Revolution of the Word. But insofar as Snyder's poems held "the most archaic values on earth" and "go back to the upper Palaeolithic" ("the fertiilty of the soil" etc.) Rothenberg would clearly find a comrade in Snyder.

I've read around the criticism of Snyder's poetics, and might have something more to say about them and, in this regard, him, later, but for now let me respond to the reading of the text itself.

There are, for one thing, a ton of blocky one- or two-beat Anglo-Saxon words. Typical is "foot-whack" in the line "Foot-whack on polished boards." I mean, who needs to know what the line denotes. The sound of "foot-whack" conveys the sense perfectly well. (How fake is this? As fake as Ezra Pound simulating Anglo-Saxon in the first Canto?) "Drum-thump" comes just after - not nearly as successful as "foot-whack."

Section five of "Logging" (the book-length poem - is that what it is - is divided into "Logging," "Hunting," "Burning") is charmingly anti-academic.

This is pretty ham-handed stuff, but charming and relevant. We get him. It's as if the primitive monosyllabic Anglo-Saxon vocab and diction is itself Snyder's ethical answer to the "be-Homburged heads" of the anthropologists and academic folklorists who spend their summers up in Northern California and the Northwest. Right in the midst of this, we have:

"Summer professors / elsewhere meet / Indiana? Seattle? Ann Arbor?" And then, again, as if this in itself is the poem's answer: "bug clack in sage."

There are even dramatic monologues in the book (it's a generic grab-bag--I like this aspect). Several fall flat, but we know the voice. "In that year, 1914, we lived on the farm..." And these guys went through the Depression, were hobos, etc.

There's a myth of some sort...about a "ghost logger." Here I love: "Get off my back Confucius / There's enough noise now."

In the penultimate section of "Hunting" Snyder tries his hand at Genesis - some sort of combination of creation myths coincide with the utter clarity of waking up in the morning, outdoors, by a campfire, and the elation of that feeling of newness. It's Snyder's version of making it new. "New! never before... / the first time...."

"Burning" ends the poem. One poem - the 8th section here - is Snyder's version of John Muir (white sachem, he) talking on Mt. Ritter. Ending in "I MUST fall."

Here there are Wobblies (Seattle-area anarchists), a bit of Zen irony ("What is the way of non-activity? / It is activity") and pithy Eastern/mountain soapbox ("'What is imperfect is best'").

The final poem is the book in a nutshell and gives a hint as to why so many of Snyder's friends and colleagues were blown away by this little New Directions triumph. The first part of the poem is "the text" and the second "the myth." Reversing the usual poet-critic order. "The text" is about fire. "The myth" seems to be about nature's survival. "The mountains are your mind.... / Rise from below."

Snyder at his best works by juxtaposition, apparent non-sequitur. My favorite:

Say what? Riprap (also known as rip rap, rubble, revetment, shot rock or rock armour) is rock or other material used to armor shorelines against water erosion. It's the right word for Snyder's poetics - and indeed he had already taken it for the title of a book of poems. Poetry performs such a function...but to keep what from sliding into what? I go back to the anti-academic poems in this book to take my cue. Poetry is a stay against conventional philosophical confusion. Getting back up that slippery slope is a matter of the most basic animal control, nothing fancy about it.

Nothing fancy indeed.
Posted by Al Filreis at 3:05 PM