the virus of modernism

I've been reading all of the letters readers sent to the editor of the New York Times Book Review after Karl Shapiro's "What's the Matter with Poetry?" appeared. (I wrote recently about Shapiro's scattershot jeremiad.)

Among the letters was this one from Ethel Tolbach of New York:

TO THE EDITOR: After adolescence, this is no time when modern poetry cannot be seen for the fraud it is. Recently a friend told me that William Carlos Williams was an exception. To my horror I found his poetry full of anti-democratic ideas, anti-Semitism, anti-Negro sentiments--the very symptoms of the virus of "modernism" which Mr. Shapiro discusses.* 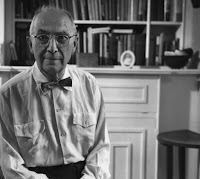 Actually this is about the one thing Shapiro did not discuss (nothing Shapiro said could have led directly to this woman's complaint). Poor WCW. In this period he was often attacked for being pink, radical, commie--too democratic, too inclusive (think Paterson)...and here, also, of the opposite.

I'm guessing that the charge of anti-Semitism is guilt by association with Pound, an infection spread by the "disease" (Shapiro's word) of modernism.

The odd double negative of the first sentence of this letter is of interest. It befits the antimodernist laments of the period 1945-60: concerns raised about modernism's pernicious influence are said to be urgent, but no alternative (except typically a return to what poetically there was before) is offered. So we don't say that 1960 is a time when we should do such-and-such new or different in poetry. We say it's not a time when we should not disclose failures and betrayals.