Barry Goldwater's book - it wasn't a campaign book but turned out to be - was published, with hurrahs coming from conservatives who felt that Rockefeller would betray them with his entitled eastern Republican-liberalism and that Nixon was good for them on foreign policy (anticommunism) and bad for them on domestic policy (too close to the moderate Ike, who was never really, to them, a true Republican, a fair-enough claim).

The book of course was The Conscience of a Conservative. It sold well despite its origin in Shepardsville, Kentucky, where the Victor Publishing Company put it out. Perhaps sold well because of them. Owning it must have given conservatives a sense of handling a document from the suppressed rightist anti-Washington underground. 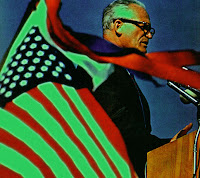 "I was born in Arizona in territorial days," Goldwater writes. There's a bit of Daniel Boone about him. He's a throwback, not at all like the eastern establishment guys.

The Baltimore Sun reviewer called G's "hard counsel" a bunch of "nonsense." Walter Lippmann scored G's notion of a "great hidden majority in the country" of a large number of conservatives who don't vote but could take over the country if they wanted. When Nixon used his "silent majority" for anti-antiwar purposes in 1968, he was borrowing from Goldwater, although without real Right license to do so.

The book was a kind of rehearsal for 1964. It criticized increasing central-government paternalism at the expense of individual self-reliance. It offered "new" decentralized government as a solution. If Goldwater had been a real southerner, this call would have been nothing more or less than "states' rights" as rhetoric against African American enfranchisement and equal access to school and law. But because Goldwater was a southwesterner, a region with little to no history of slavery, he could avoid that assumption, even as some southern conservatives embraced him as good for segregation.

Should he join the Nixon ticket in '60 as vice presidential candidate? Russell Kirk, a brilliant super-conservative intellectual, wrote that G was "too good and too important...for that powerless post."

Rocky was a problem for the Goldwaterites. The two men were at opposites ends of Republicanism. Remarkably, they made a joint appearance on Meet the Press in July 1960. I will search for a recording of that!
Posted by Al Filreis at 12:05 PM