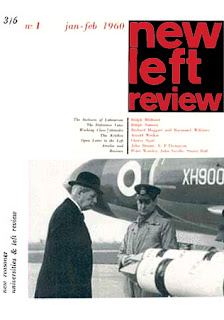 Clancy Sigal wrote an "Open Letter to the Left" in the English journal, New Left Review (Jan.-Feb. 1960 issue). He spoke of a "crippling pragmatism" on the left. And: "the New Left so far has been lazy about its political and economic analysis because it too easily depended, not for its vocabulary but its assumptions, on the Old Left; and it was superficial in its cultural observations." He urged the British left to establish a socialist Student movement.

New Left Review (which, as I say, began publishing in 1960) counted among its first editorial board members Norman Birnbaum, Doris Lessing, Dorothy Thompson, Raymond Williams. The main editor was (famously) Stuart Hall. Also publishing pieces in the first issue: E. P. Thompson on "The Point of Production," Dave Dellinger asking "Ar Pacifists Willing to Be Negroes?" and Paul Rose on the youth of Manchester. The gist of the project was to bring intellectuals and workers together (long a craving of the Anglo-American left). The editorial stance was anti-Soviet Marxist and, generally, anti-communist--although at the same time anti-anticommunist.
Posted by Al Filreis at 10:43 PM