Every art in the 20th century is a flourishing art, Karl Shapiro writes in the New York Times Book Review on December 13, 1959. Except poetry. Except poetry.

Poetry, he says, is "diseased" and the reason is....modernism. Modernism, that "minor intellectual program which took the stage more than a full generation ago...with standards [that] are enforced rigorously by literary constables ready to haul away any dissenters."

Alas, he laments, our poetry today is "the only poetry in history that has had to be taught in its own time."

Our poetry is a poetry compounded by verse and criticism. He calls it "criticism-poetry."

T. E. Hulme's "Speculations" is "like the 'Mein Kampf' of modern criticism."

And "the revolt against modernism seems to be gaining ground as long last." And thank the lord these people are "beginning to use subjective judgment in place of the critical dictum."

And this "new anti-modernist poetry is brutal, illiterate and hysterical," but that's "the price we have to pay for the generation-old suppression of poetry by criticism."

It's a wild and no doubt for many readers an exciting attack, seeming to augur a great awakening. But if you press just a little at its salacious generalizations it falls apart in confusion. The chief problem is that it's not clear who, overall, Shapiro is attacking.

He attacks the modernist poetics enabled by the likes of Hulme - so Pound, H.D., at least the early Williams, early Eliot. And people like Wallace Stevens who were athiests and made modern art a kind of god (supreme fiction). But he's also attacking the New Critics, and it's they he means when he excoriates poetry-criticism--them (Tate, Ransom, et alia), and Eliot and perhaps I. A. Richards and his ilk. And what new poetry is he, in the end, hoping for? "[B]rutal, illiterate and hysterical," non-academic, anti-intellectual: he doubtless means the Beats, the new Whitmanians. Toward the end he refers to these 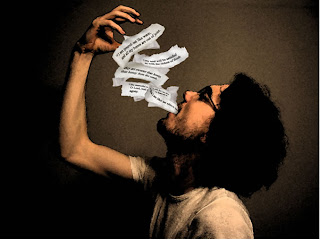 rough types as emerging from the restored lineage of Whitman and William Carlos Williams. Yet Williams is of course very much in the modernist line Shapiro spends most of the essay damning. And the fact that the Beats embraced WCW should have signalled that there's a connection between them and modernism (in Burroughs and Ginsberg). In a few months, of course, Donald Allen's collection will signal that a new avant-garde shares both the anti-academicism and anti-formalism Shapiro feels is necessary now and the direct links to modernist elders (Pound, Williams again, Stevens to some degree, Stein, H.D.) that Shapiro believes is anathema to any new development in poetry.

One thing is certain: anti-modernism is alive and well as the decade turns.

I've read the letters to the editor that followed Shapiro's article - in the January 10, 1960 issue of the Book Review. A young Robert Scholes writes from Charlottesville that Shapiro's claim that the anti-romantic modernists hated Blake is wrong, since, for one thing, Yeats was a great admirer of Blake. Responding to Shapiro's disgust at New Critical pedagogy (where biography and history are eschewed in favor of attention to the poem itself), one couple from Narbeth, Pennsylvania, wrote in to ask Mr. Shapiro to list colleges where such a method is used--since they, having been dully trained with biographical info irrelevant to poetic understanding, are hoping to sign on and learn a little about poetics. Chester Page from Brooklyn wrote in to say that Eliot and Marianne Moore seem to be doing just fine and that American poetry seems in good shape. The then-young poet Theodore Enslin noted an obvious problem with Shapiro's complaint against academic critics - namely that Shapiro is one. Charles Martell wrote from Durham to remind readers that this "sophomoric diatribe" should remind everyone of the scattershot half-logical attacks against all of modernism (he means by Robert Hillyer) at the time of the Bollingen controversy in 1949, ten years earlier. A man from Haverford, PA, reminds readers that Shapiro himself "has not only written criticism but rimed criticism" and yet "counts himself on the good side" in the good-vs.-evil scenario he lays out.