e. e. cummings has a process 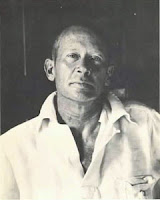 e. e. cummings got really famous in the 1950s. In '58 he was awarded the Bollingen Prize. And in the new environment where poetry readings were for real (thanks to the Beats among others) cummings fared well, because he was a good reader of his own poems, and because whatever bias readers had against his typopgraphically odd arrangements on the page could be overcome when they heard the poems aloud--and they are much more conventional and traditional (so many of them straightforward love poems) when heard.

His 95 Poems, the last book of poems published in the poets' lifetime, appeared in October 1958.

But 1960 was the turning point: Norman Friedman's serious critical book, E. E. Cummings: The Art of His Poetry was published by Johns Hopkins. Cummings had been impressed by Friedman's work six years earlier, and had lent the critic a stack of 175 worksheets he had used for the poem called "rosetree, rosetree," thus enabling the book of 1960 to focus a great deal (a whole chapter) on the process by which the cummings poem was made. Presumably this diminished concerns about what seemed the "anything goes" quality of cummings' poems.

In the same year, our year, '60, George Firmage's E. E. Cummings: A Bibliography appeared and immediately became the standard reference work for people wanting to know what and when cummings had published.

At the end of September 1960, cummings and his wife Marion sailed first-class on the Vulcania and made a stop in Sicily. Then Athens in November.