the most basic words in English 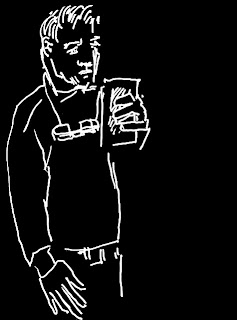 CAConrad and his colleagues at PhillySound worked hard to reproduce the transcript of a 1979 interview Gil Ott conducted with Jackson Mac Low, and it (part? or whole?) has been added to the PhillySound blog.

Mac Low always remembered in detail when his procedure for making his poems developed this way or that. He remembered the process more accurately, one might say, than the poems that got produced by it. Which of course is his point: the process is in a sense the (meaning of the) poem; the medium is (the same as) the message.

Here's Mac Low telling Ott about the first time he used his "nucleic method" (for choosing sourcetexts) in early 1961:

I began using the "Nucleic Method" in 1961, when I wrote a number of poems whose titles begin "From Nuclei..." At that time I also produced a whole pack of cards for improvising performers (NUCLEI FOR SIMONE FORTI), parts of which later became the basis of the series of Dance-Instruction Poems called THE PRONOUNS (3rd edition, Station Hill Press, Barrytown, NY, 1979). (This pack and how I got from it to THE PRONOUNS is described in the prose essay published with the poems.)

At that time in early 1961 I drew several lists of words by means of random digits from the Basic English List. Both the NUCLEI FOR SIMONE and a number of verse poems I wrote at the time were made by using chance means to draw words from these word lists that themselves had been compiled by chance operations. The Basic English list had been compiled in, I think, the 1920's by C.K. Ogden and I.A. Richards. They believed that it included all or most of the most basic words in English and that most other words in English (except for proper names) could be "translated" into combinations of these Basic words. For instance, they translated the whole New Testament into Basic English. They thought that Basic English would be a better universal language than Esperanto, which in the 1920s was the widely used "universal language," albeit an artificial one. Since English was already so widespread, they thought its grammar and basic words would be a better universal language than any artificial one.

In making the FROM NUCLEI poems, the NUCLEI FOR SIMONE, and some other 1961 texts, I just used aleatoric means to draw words from their lists, which was in one of my dictionaries. That's when I began working freely between chance-given pivotal points ("nuclei"). Starting with Ogden and Richards' list, I'd let random digits draw a large list, and then often make a smaller list from the larger one, also by means of random digits, for use in any particular poem. As I said, between the chance-given nuclei I wrote pretty freely. I used similar methods in writing THE PRESIDENTS OF THE UNITED STATES OF AMERICA, but in making that series, I used the Phoenician meanings of the successive letters of the alphabet that comprised the presidents' names as my nuclei. For instance "G" is "Gimel" or "camel": thus the first line comes from the first letter of George Washington's name: "George Washington never owned a camel." Similarly, "E" and "O" mean "eye" and "head": the next line begins: "but the eyes in his head..." and so it goes throughout the series.