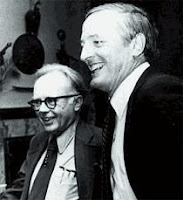 Russell Kirk, a true conservative intellectual, hated Freud and in mid-'59 hailed the publication of The Freudian Ethic, an Analysis of the Subversion of American Character by Richard LaPiere, then professor of sociology at Stanford and editor of the McGraw-Hill series in sociology and anthropology. Kirk writes, in part:

The Protestant ethic (a term borrowed from Max Weber), Dr. LaPiere writes, is being supplanted by the Freudian ethic -- that is, a coddling of the human person in the delusion that man is happiest when he is almost back in the womb.

This study contains the keenest demolition of Freudian psychology that I have seen anywhere, particularly the two chapters about Freudian theory and practice in education: "The Progressive School" and "The Adjustment Motif." Going straight to the heart of the matter, Mr. LaPiere finds in a vague and vulgarized Freudian notion of man the principal cause of the failure of modern American education.

My 1950s web site includes the full text of the review. Above: that's Kirk on the left, and William F. Buckley on the right.
Posted by Al Filreis at 6:59 AM