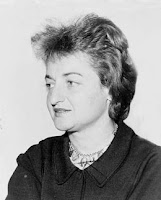 Betty Friedan's remarkable book of narrative feminist sociology and mass-market fiction lit crit, The Feminine Mystique was published as excerpts in '62 and finally as a book in 1963. But she was gathering the materials for it thoughout the second half of the 50s, and was doing a lot of the writing and final research in '60 and '61.

Here are just a few of the many books and articles published in 1960 that she consulted:

1. the 75th anniversary issue of Good Housekeeping, May
2. "Why Young Mothers Feel Trapped," Redbook of September
3. Noel Clad, "Men Against Women," Good Housekeeping, January
4. Mary Ann Guitar, "College Marriage Courses--Fun or Fraud?" Mademoiselle's February issue
5. Margaret Mead's "New Look at Early Marriages," interview given to US News & World Report, June 6
6. "The Woman and Brains (continued)" in the New York Times Magazine of January 17, outraged responses written to the magazine in response to an article by Marya Mannes called "Female Intelligence--Who Wants It?" that had been published in the January 1 issue
7. Benjamin Spock, "Russian Children Don't Whine, Squabble, or Break Things--Why?" in Ladies Home Journal's October issue
8. April's transactions of the New York Academy of Sciences, which featured Nanette Scofield's study of the changing roles of women in suburbia
9. Richard and Katherine Gordon's The Split Level Trap, written with Max Gunther
10. an article on the social psychiatry of the mobile suburb, also by the Gordons, published in the International Journal of Social Psychiatry vol 6, number 1
Posted by Al Filreis at 8:15 AM