Watched Elmer Gantry also this past weekend, another of the top 30 from '60. Burt Lancaster contorted his face into lit-up hucksterish glee, an expression he never ever for a moment loses in the otherwise unendurable 147 minutes of this melodrama about contending American values. Well, when Shirley Jones shows up as his floozy lover, one does attend closely (she's radiant--although, tellingly, a low-life). But even the good moment of seeing Jones before The Brady Bunch quickly fades.

The film is based, of course, on the bad novel by Sinclair Lewis.

It's a battle between the reasonable side of tent-pitching town-to-town wandering evangelical Christianity in the rural midwest and the ecstatic side with its tactics gleaned from sensational journalism, commercialism and the circus. Of course Jean Simmons (Sister Sharon Falconer) represents the reasonable side, and we root for her, for a while. Lancaster's Elmer Gantry is so alluring and exciting that even Sharon is willing to bring ecstasy into the show, and, predictably, the whole theological house of cards comes tumbling (or burns to the ground, to mix the metaphor and yet be more exact).

The key moment in this battle between ideologies of religious style is when Elmer suggests to Sharon and the other sober promoters of evangelical things-as-they-are that, with him and the new more modern approach, they are ready for the big city. Sharon's eyes light up. Is such a thing possible? But our place is the small rural town (American places with no other entertainment, although she won't say it that way). Elmer wins and they go to the city. (A bad sign, of course, since this is essentially a conservative film, and in conservative films cities are always scenes of demise.)

But what city? It's Zenith, Ohio. In the world of Sinclair Lewis's ficton, I know from reading and teaching the novel Babbitt, Zenith is not the zenith of anything. It's still at heart a small town, only the town prominents put on airs of sophistication. And George Babbitt himself, who actually gave the name to false middle-class modernity, becomes a somewhat major character in the story. Yikes. What a mess.

Feelings and attitudes toward Elmer's modern American theology are so confused by the end that it's no wonder we had to light absolutely everything on fire, stand up from the ashes, and walk out of town in the final scene. This, I suppose, is 1960 trying to rewrite 1935 in such a way as to show the flaws in the wandering, dislocated way of American life while at the same time expressing the hope that the worst hucksters (but only the worst) wander away from our town when things go too far. 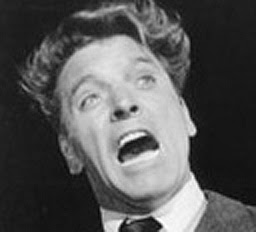 Burt won Best Actor at the Oscars. Why? Sheer acting will. They must have used a crowbar to pry loose his normal face from the maniacal up-by-bootstraps American expression he had to wear for weeks while filming this thing.
Posted by Al Filreis at 7:40 AM