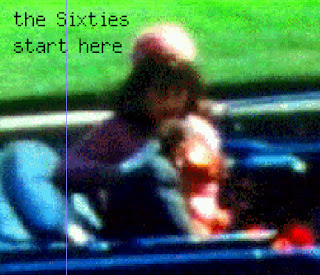 Tom Brokow's second greatest generation is that of the 1960s, according to his just-out book Boom! Voices of the Sixties: Personal Reflections on the '60s and Today (a book that I will almost certainly not read--because there are already ten or so really great books about the decade that I want to read first).

Ah, but for Brokaw the 1960s run from 1963 to 1974. So the decade is defined on one end by the assassination of JFK and on the other end by the resignation of Nixon.

This is not just a center-stage-centered approach (though it is that, first and foremost) but, it seems to me, ignores art and what we call "culture" (in the phrase "arts & culture") almost entirely. It helps me understand a little more and a little more keenly what I want to do in learning about 1960 and its effects.
Posted by Al Filreis at 9:32 AM