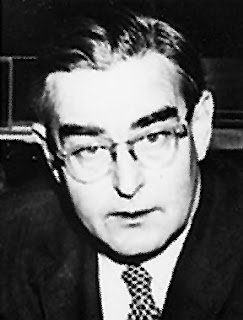 Alan Swallow brought out J. V. Cunningham's Tradition and Poetic Structure. JVC says that he attempted in this book to be "cold-blooded," but it's never quite clear why. Perhaps because, as we'll see in a moment, he didn't want to be perceived as belonging to the club of people who put poetry in general on a pedastal. Anyway, he implies that cold-bloodedness is an attitude opposite of that felt by others who "practiced...the highest and easier art of literary criticism." So we are to suppose that this analysis not itself a form of literary criticism. (Then what is it?)

It's possible that the term "cold-blooded" was a nod, or bow, to Cunningham's teacher-mentor, Yvor Winters, who had successfully raised cold-blooded poetry criticism to a new level. (By the way, Cunningham never formally studied with Winters, although he did spent some 15 years at Stanford, soaking in the master's contrarian blend of modernism and anti-modernism.)

In "Poetry, Structure and Tradition," he attempts to define poetry--no easy matter, for in this case "the object of definition is not constant."

The difficulty of definition "springs from the need to defend and praise poetry." "It is felt that one has not only to define poetry but also in so doing to put it in a place of honor." Yet, he contends, such claims for poetry "have in fact weakened it." On one hand poetry's puffers have "erected pretensions that no linguistic construction, no poem, could ever hope to satisfy."

Among such pretensions (and now we're really getting to it - to, for one thing, the connotation of the word "tradition" in the book's title) is that poets can lead the life of the nation. Silly for poets or poets' "nice" commenders to pretend that poets are the unacknowledged legislators of the world--"and a good thing it is that they aren't." This political pretension has "limited," he believes, the kind of poetry that can be written.

So moving away from the poet's power to say something for and to the polity is a move toward, not a retreat from, poetry's capaciousness. And from here making a definition is apparently a simple matter. "Poetry is what looks like poetry, what sounds like poetry. It is metrical composition."