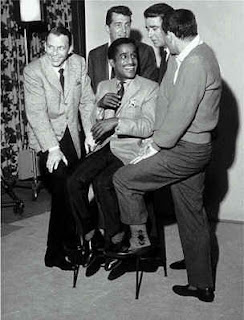 More people saw Ocean's Eleven in '60 than any other film. Yes, the allure of the "Rat Pack." But more, I think: it puts a finger on a generational attitude, a certain specific emotional distance from World War 2. These guys care too little about what they had to do then; they also care too much. They're all balled up and they're also much too cool.

Sinatra is Danny Ocean and Sinatra's good buddies are Danny's good buddies - among them Dean Martin, Peter Lawford (months later he's related by marriage to the Presidency), Sammy Davis, and Joey Bishop. Danny's crew was in the 82nd Airborne division, paratroopers dropping against the odds into Germany. Fifteen years later, the end of that era: they're a bit rusty but ready to apply the skills Uncle Sam taught them against the casinos of Vegas. The style of the film is mod: bright 1960's colors (oranges and browns), lots of biomorphic horizontals, a quasi-early-pop-art typopgraphy in the titles. It's WW2 content set in sleek modern mode. We don't mind their grand theft because it's cool, because they're cool (Sinatra is the coolest, with Dean Martin a close second, and Lawford spins cool with a serious rich-boy neurosis, and Sammy's super-cool has a major race problem), but also because we are persuaded that since they risked their lives for the country and have wandered at the edges of society since then (in jail, in trouble, not monogamous, utterly alcoholic), they should be entitled to a portion of the profits made by these homefront casino owners. 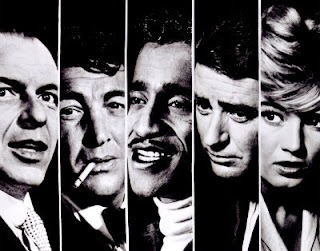 It's just a heist movie, albeit with pedigree ensemble and tons of style, and thus one is tempted to read no more into it. But there's history happening here and the screenplay at certain moments acknowledges that. Just enough time has passed since the war so that a belated Coming Home narrative can both assume we know many vets have become asocial and diffident about earning money the honest, old-fashioned way and make playful yet accurate-seeming analogies between military skills we taught Americans in order to achieve international ascendancy on the one hand and American lives of major crime on the other. The irony is that this is the enemy's content (yes, fascism) even if it's hidden in the slick victorious style of the victors. They do the job against Vegas as if it's a war. Which it is.

Here's a scene: the wealthy mother of one of the 82nd (Peter Lawford's Jimmy Foster) is to marry a sporty, well-dressed prominent with connections to organized crime, Duke Santos (Cesar Romero). After Danny's boys rob all the casinos, Santos figures out that his fiance's ne'er-do-well son is involved (that's Lawford), and he tells Mrs. Foster what he suspects. She's indignant:

Mrs. Foster: That’s ridiculous. Jimmy has always had all the money he could spend. Why would he rob anyone?

Duke Santos: Hitler had Europe. Why did he want Russia too?

Mrs. Foster: Oh, you can’t compare my Jimmy with that monster. Why, he actually fought Hitler. He and his paratroopers over-ran Germany.

I'm afraid that in the context of this film, Santos is right. They've once again been dropped in behind enemy lines, but it's no longer clear whether these soldiers behave like or unlike the enemy, nor who the enemy is. Is it Santos himself - so totally connected to criminality as to be utterly in control and above the law (such as it is in Vegas)? Wait, but...he's marrying your mother! What's that going to do to a vet's psyche?

Is Vegas itself the enemy? Is it Danny Ocean's Uncle Sam-taught casual ruthlessness in applying martial concepts to peacetime? Is it Sinatra himself (not Danny, but Frank Sinatra - the only person in the U.S. - sorry, Mr. Clooney - who could pull off the role completely)? It's almost as if the Sinatra character is fighting the brainwashing that would almost get the better of him two years later in that classic of postwar confusion, The Manchurian Candidate. Only the war there will be Korea, already a much less well defined war than the great anti-fascist crusade, where good and bad were clear, and about which, even by 1960, one would think the lines of distinction were still as bright as a day in the lawless Nevada sun.
Posted by Al Filreis at 8:29 PM